Lenggong folk happy to have 11,000-year-old skeleton back

iplbones150214 14...Members of the public admiring the actual remains of the Perak Man on the day it was opened for public viewing at the Lenggong Valley Archaeological Gallery on Feb 15.

LENGGONG folk are elated that the Perak Man is finally home.

Unearthed by archaeologists at Gua Gunung Runtuh in the northern town of Perak in 1991, the country’s oldest prehistoric man has never been displayed in Lenggong.

Until last year, the 11,000-year-old skeleton was displayed at the National Museum in Kuala Lumpur while a replica was showcased at the Lenggong Archaeological Museum.

The decision to move Perak Man to Lenggong was made last year after Lenggong Valley was recognised as a United Nations Educational, Scientific and Cultural Organisation (Unesco) World Heritage Site in July 2012.

Perak Man was successfully relocated to the town’s museum, now known as the Lenggong Valley Archaeological Gallery, in October last year and was opened for public viewing last Saturday.

Local resident Loke Ah Hong, 72, said it was about time that the Perak Man was returned to Lenggong. 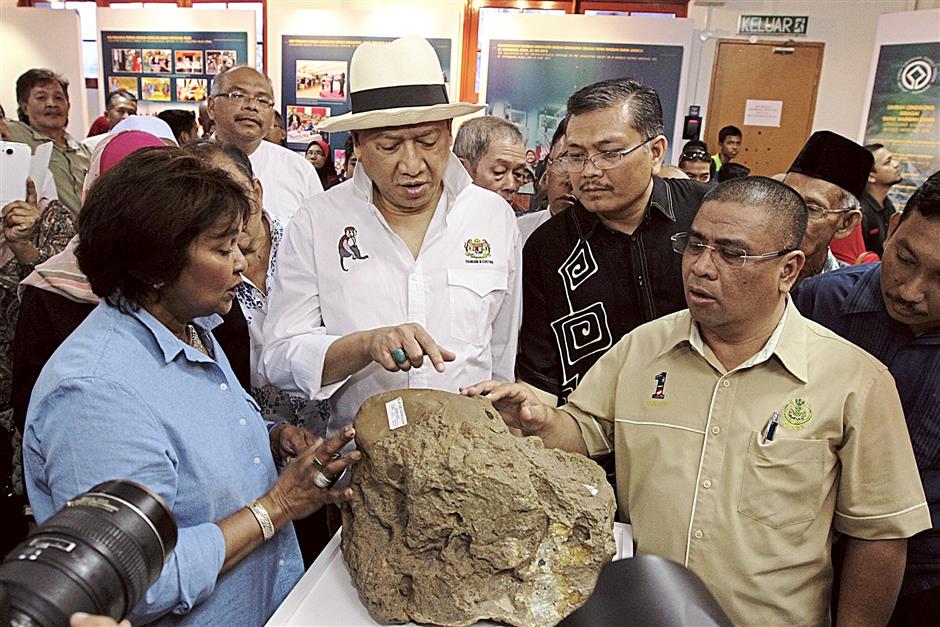 (From left) Zuraina explaining to Nazri, Lenggong MP Datuk Shamsul Anuar Nasarah and Kota Tampang assemblyman Datuk Saarani Mohamad the significance of one of the exhibits on display at the Lenggong Valley Archaeological Gallery.

“Many have come to visit but never got to see the real thing and left disappointed,” said Loke, who owns a photo studio in the town.

Smallholder Chan Chun Leong, 73, lamented that as a local, even he had not seen the actual Perak Man.

“I am very happy and excited to see it.

“They took it away as soon as the excavation was carried out,” Chan told The Star shortly before the gallery opened its doors to the public during a ceremony to celebrate the Perak Man’s homecoming.

Nature guide Abdul Rahman Abdul Rahim, 60, said many tourists had complained about not being able to view the real thing when they visited the museum in Lenggong before this.

“It is about time that the Perak Man is returned to Lenggong.

“Lenggong is where it should be because Lenggong is its home,” he said. The public reading about the Perak Man at the gallery.

Abdul Rahman said that Lenggong Valley would receive more visitors now that the Perak Man was being displayed at the town’s museum.

“I just hope that the authorities would do more to provide the necessary infrastructure to boost tourism around here.

“Many people have been visiting our town but there is lack of accommodation for them,” he said.

“Hopefully, more can be done and more tourists will visit our town and help us generate more income,” he added.

No one was happier about Perak Man’s homecoming than Heritage Commissioner Prof Emeritus Datin Paduka Zuraina Majid, who with a team of other archaeologists had made the discovery in 1990.

“This is where he belongs,” said an emotional Zuraina when reporters asked how she felt.

Lenggong Valley, she said, was the earliest and a very important archaeological site in the country. The public watching a video on the discovery of the Perak Man and other important archaeological findings in Lenggong Valley.

“It can be said that Lenggong Valley is the earliest capital in the country as no where else have people been found to live,” she said.

Tourism and Culture Minister Datuk Seri Nazri Aziz said the Perak Man was considered the most complete and oldest ancient skeleton in the peninsula.

“Despite being exposed to the elements for about 24 years, it is still in good condition, to the amazement of many experts the world over.

“The Perak Man is now placed in a conservation box where humidity levels and temperature are checked twice a day and monitored by camera by the Lenggong World Heritage Office.

“The National Heritage Department would, from time to time, also inspect the relics to ensure there is no fungus on the bones,” he said.

Nazri said his ministry was promoting the Perak Man and Lenggong Valley, apart from Malaysia’s four other World Heritage Sites, by collaborating with its Asean neighbours on a “Unesco Trail” tourism package.

He also advised the public not to damage or vandalise the archaeological sites in Lenggong Valley.

“We should all be proud because we have a piece of human history right here at our doorstep,” he said.