TURNING over a new leaf may not be the easiest feat.

Yet every step forward, is leaps and bounds of success for former drug addicts.

Running the uphill race towards a better life, 15 non-governmental rehabilitation centres sent their graduating inmates to participate in the 10th Exodus Games at Matsushita Sport Centre in Shah Alam.

Graduating or succeeding in their respective two-year recovery programme, majority of the inmates who ran 4 x 100 laps, jumped high and long in the games of the day were preparing themselves to return to society and the working world.

“It is a constant challenge for them to integrate back into society, once they have completed the two-year programme.

“Once they are successful in being free from drugs, they have to maintain it,” he said, speaking from his own past experiences. 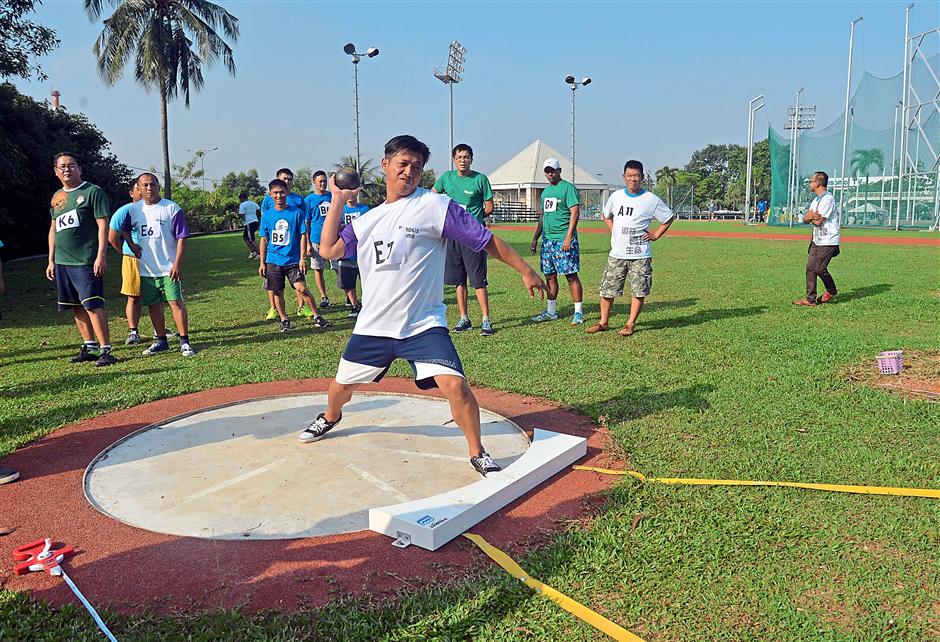 The short put contestants getting ready to start the event.

“Just because someone stops taking drugs does not mean their character overall has changed.

“They must continue the fellowship move around similar circles to keep themselves motivated,” he said.

Having participated in previous Exodus Games for the 400m and 200m race, Green Pastures rehab centre volunteer Shane Raj Martin, 42, said beyond commitment, the greatest challenge for each participant is actually wanting to participate.

“Each student in the rehab programme have different drives to succeed. Some see it through and some need more encouragement.

“Three years ago, I joined the centre because I knew I needed help and now I am able to help others who were like me,” he said.

“The Exodus Games is one way to encourage our inmates to stay committed to being drug free.

“But soon, they will need to get back into the working world, because if they do not have a job, they might run back to drugs,” he said. 100m runners giving their best during the competition.

“I will hire rehabilitated inmates, because I believe in giving them a second chance.

“Few years ago, I hired a professional architect who was a former drug addict as part of my staff.

“He needed motivational support and I would talk to him every other day and encourage him further.

“Now, he has two kids and is doing very well,” Lee said.