Berjaya Langkawi Resort general manager Chris Niuh said the three-day mangrove conservation campaign was close to their hearts, as it had a direct impact on the surrounding community of the 20-year-old resort.

“Villagers of Kampung Kuala Melaka in Kuala Teriang area suffered the worst damage following the 2004 Indian Ocean tsunami, as there was no engineered coastal protection or sufficient mangroves to act as natural coastal defence.

“The first steps in our M4L campaign is focused on replanting mangrove trees in this area, for these communities to recover and achieve greater sustainability in restoring the surrounding mangrove ecosystem, which is essential for coastal protection during strong waves. Step-by-step instructions: Media members, clad in yellow boots, listening to a briefing by Malaysian Nature Society personnel on how to plant mangrove saplings.

Malaysian Nature Society head of communications Andrew J. Sebastian, who guided the enthusiastic team of novice tree planters, gave a briefing on the importance of mangroves to the island’s rainforest ecosystem.

“Mangrove habitats and ecosystems store and cycle nutrients, filter pollutants, protect shorelines from erosion and storms, and play a vital role in modulating climate as they are a major carbon sink and oxygen source. 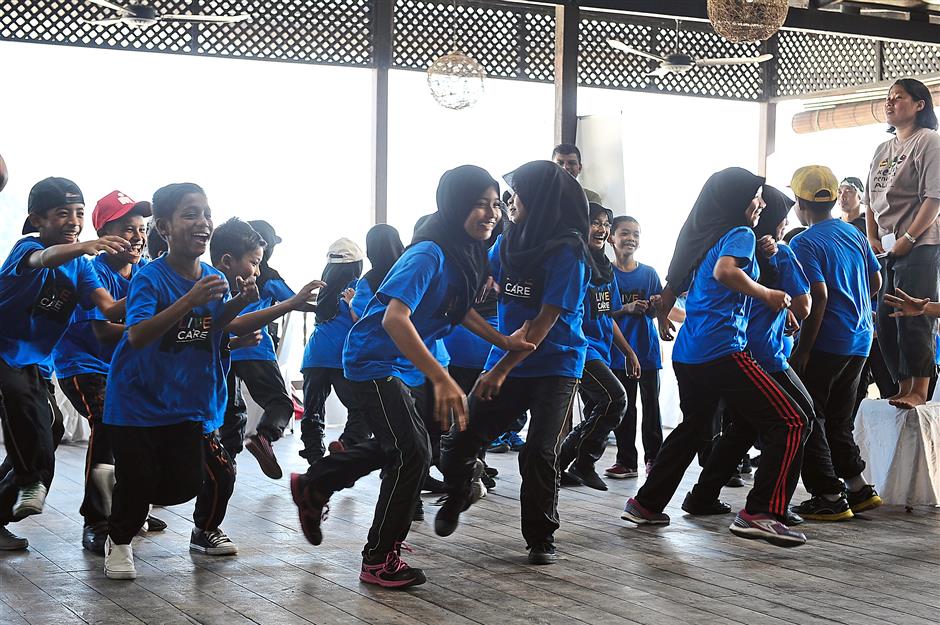 Learning through play: Pupils aged 10 to 12 from SK Kuala Teriang enjoying a game that was part of the Mangrove Awareness Workshop.

“For effective mangrove replanting, we used the rhizophora mucronata species, due to its fast-growing nature and ability to flower within its first year of planting.”

Led by Malaysian Nature Society personnel, 1.82m PVC tubes were first encased in the sand to form a wave breaker stretch to protect the M4L mangrove planting site to reduce the impact of the waves on the saplings and ensure a higher chance of survival and growth.

Sebastian said he had high hopes for the new project in restoring balance to Kuala Teriang’s natural ecosystem for years to come. Memento of group effort: Pupils of SK Kuala Teriang in a group photo with members of Malaysian Nature Society and the media.

Serving as a local platform to educate and strengthen mangrove conservation efforts, the project’s passion was also shared with 48 pupils aged 10 to 12 from SK Kuala Teriang.

The children enjoyed interactive games and tree-planting sessions that explained the characteristics of different mangrove species and the threats they faced from deforestation. “It was truly fulfilling teaching the children how to carefully plant the mangrove saplings to ensure its survival.

“Teaching them what I had learnt earlier from members of the Malaysian Nature Society helped me remember points on mangrove conservation and interesting facts on the trees we were planting.

“It was definitely a memorable and enriching experience,” said Bernard Cheah, who was with the media.

From the session, an additional 98 mangrove saplings were planted by the children at Berjaya Langkawi Resort’s mangrove site.

Thinking ahead in promoting eco-tourism, Niuh said the island resort, which covered an area of 28.3ha, would eventually introduce more eco-friendly holiday packages such as a three-day-two-night stay at their Rainforest Chalet with mangrove-planting activities.

“Maintaining the resort is a constant challenge as we are between two live ecosystems, the sea and the rainforest.

“Unlike our city hotels, our resort here is more focused on being as natural as possible in terms of our architecture and daily practices.

“Eventually, we will introduce holiday packages that enable our guests to not only enjoy the flora and fauna around the area but also incorporate activities to help them understand and appreciate the ecosystem better,” said Niuh.