Call to save every drop

How precious is water? Very – it is essential to our survival. But water’s value is not reflected in its price.

Water is relatively inexpensive in Malaysia.

In Selangor, for example, which is Malaysia’s most industrialised state, water is essentially free for residential users as the state government subsidises the first 20cu metres of consumption worth RM6.

Therein lies the crux of the problem; water is misused because there is no value attached to this most precious resource on earth.

How do you convince people that water is valuable when it is so cheap? There is also a generally held belief the supply of water is bottomless in Malaysia.

After all, Malaysia gets 2,940mm of rainfall a year, the seventh highest in the world.

However, as Nestle Manufacturing (M) Sdn Bhd group engineering manager Hasmukhpinder Singh pointed out, 51% of this is lost through surface run-off and 42% to evaporation, leaving only 7% for groundwater recharge. 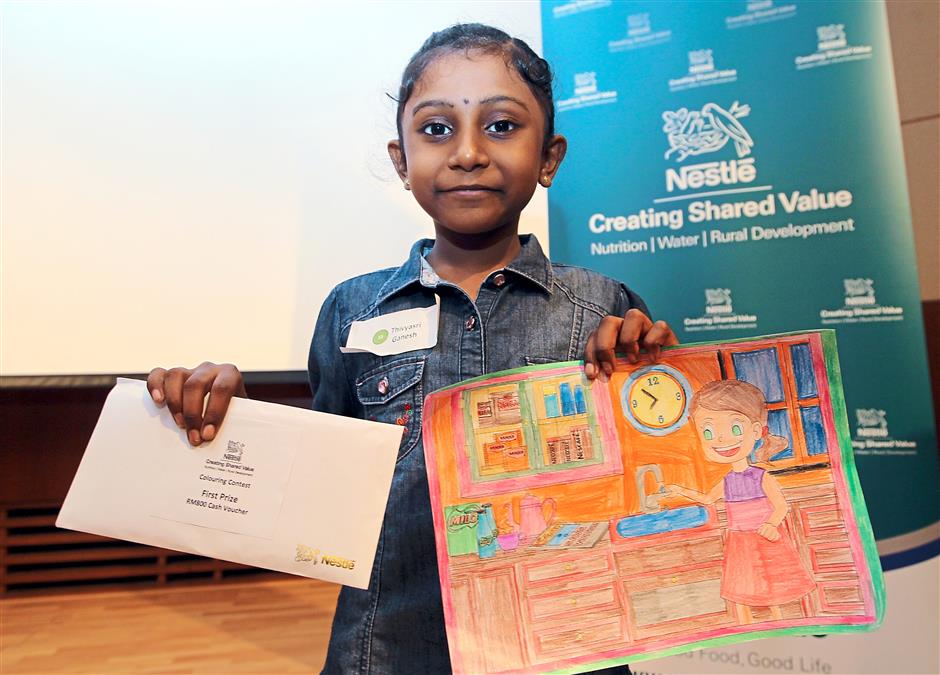 Thivyasri Ganesh, 6, who won the colouring contest held in conjunction with the StarLIVE session.

He was speaking at this month’s StarLIVE session, Nestle’s “Water Guide: Save Every Drop.”

It was organised by the Star Media Group (formerly known as Star Publications (M) Bhd) in collaboration with the Swiss multinational and held at Menara Star, Petaling Jaya.

The talk underlined that water was precious and increasingly becoming scarce, how to use water efficiently and the role of Nestle in water conservation worldwide.

According to Hasmukhpinder, globally, industry is the second major user of water at almost 20% while residential users comprise less than 10% and the lion’s share going to agriculture at 70%.

The chemical engineering graduate from Universiti Malaya shared that water was one of the three major focus areas under Nestle’s creating shared value philosophy. Worldwide, Nestle is involved in 489 water-saving projects, saving about 6.5 million cu metres.

In Malaysia, farmers are educated to use the semi-aerobic rice farming method in which water is left in the field for only 45 days instead of the normal 90. This has resulted in a 35% reduction in water usage. 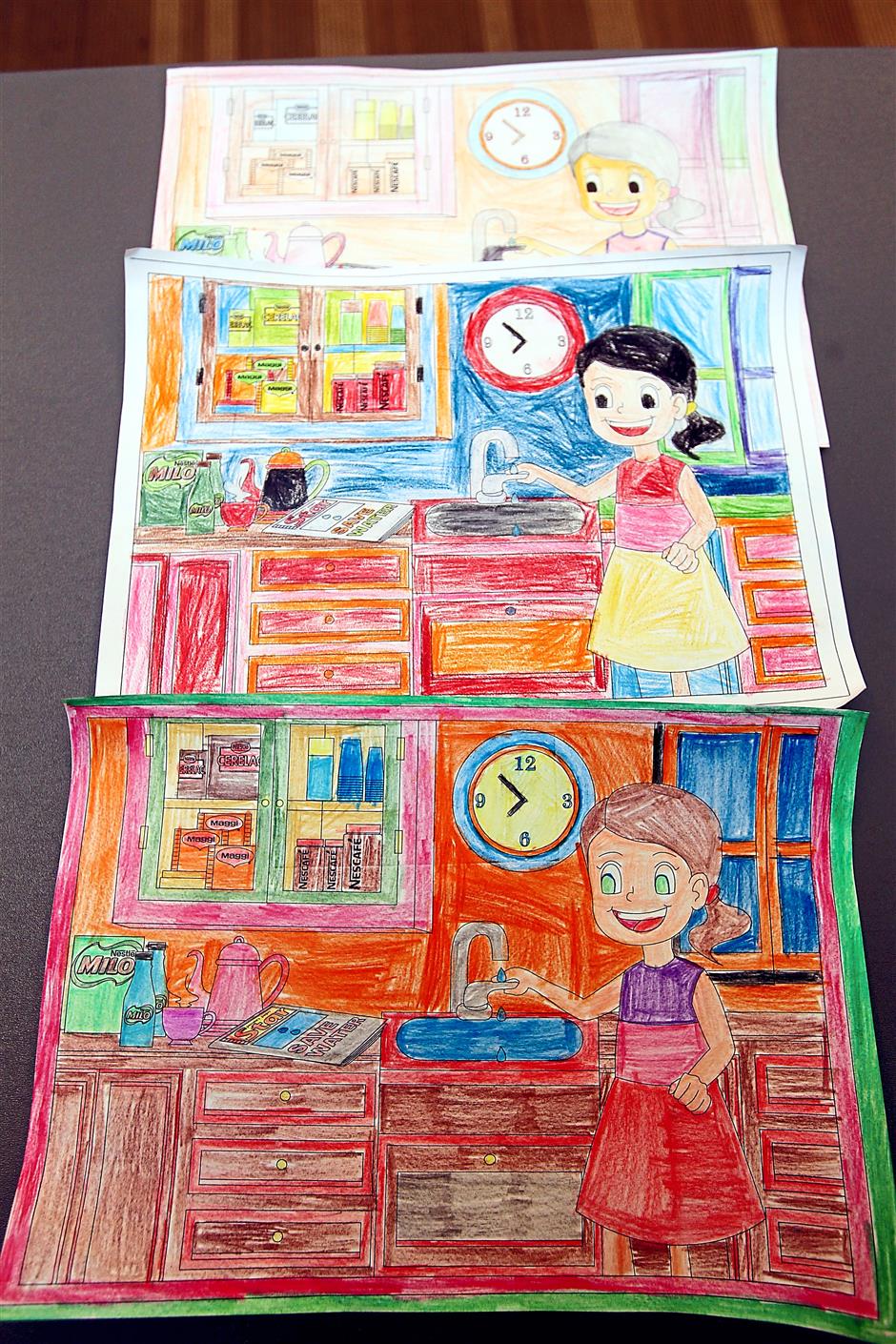 The works of the top three winners in the colouring contest. — Kamarul Ariffin / The Star

Hasmukhpinder said there was a gap between supply and demand globally.

By 2050, Earth’s projected population of nine billion will need more water for food and energy production.

Although 70% of the planet’s surface is covered with water, only one percent of it is usable. Not all areas are affected equally. Malaysia has faced little or no water scarcity, but other countries have not been so lucky.

Hasmukhpinder cited instances where the water volume in the Yellow River in China, the Rio Grande River in Mexico and Lake Aral in Kazakhstan/Uzbekistan had reduced greatly and the challenges and problems this posed.

However, depleting water resource has hit home in the past few years, especially in Johor and Selangor. Consumers in parts of Johor are currently experiencing scheduled water supply disruptions while residents in Selangor have had to put up with intermittent watercut.

In Malaysia, rivers are the main source of water and provide 97% of our needs.

The Sungai Selangor Dam, which supplies 60% of water to Kuala Lumpur and Selangor, has had to run at peak capacity to meet demand and the shortfall in supply.

So with all these warning signs, what can commercial and residential users do to ensure that water is conserved? Hasmukhpinder revealed that all Nestle factories had reduced water pressure, recycled water for equipment cooling and reused treated water for gardening and washing. Water consumption has been decreasing steadily.

In the long term, one of the global strategies being looked at is to have zero discharge for some of Nestle’s latest factories. All new Nestle factories will have no water discharge.

The part of the StarLIVE talk that got people taking notes was Hasmukhpinder’s top 15 tips to save water at home.

Although some of the tips were ones the audience had probably heard before, such as don’t leave the tap running while washing dishes and brushing teeth, he gave figures to show how these simple changes could result in major water savings.

Others include storing cold water while waiting for the hot water to heat up when showering, and installing restrictors or low-flow taps to reduce water pressure.

Placing a brick in the toilet cistern to restrict the volume of water will also help.

Another water-saving trick is to use watering cans instead of a hose.

Hasmukhpinder also advised watering be done in the early morning or late evening to reduce water loss through evaporation.

As an alternative to investing in expensive rain-harvesting systems, which could cost more than RM1,000 minimum, Hasmukhpinder advised using a drum to collect rainwater below the gutter, which only required minor modifications. The water could be used for gardening and other outdoor uses.

One of the big losses in households, sometimes up to 300%, is due to leakages, both in obvious pipe and faucet leaks and the not-so-obvious underground pipe leaks.

The best way to conserve water is to check taps and outdoor pipes for leaks regularly and to monitor the water meter and bill to detect unused flow or loss.

Also, investing in water-efficient appliances such as washing machines and shower heads will pay off in the long run in terms of conserving water.

All these steps will result in an estimated 35% to 45% water reduction in households.

Engineer Melvin Kuek also found the talk enlightening and highlighted the challenges faced by industry to incorporate sustainable practices in the use of water.

“The investment cost of putting it in place is very high and hard to justify,” he said.

A quiz at the end of the session showed that the audience had received the conservation message loud and clear as they excitedly competed with each other to answer the questions to win attractive prizes. To make the occasion a family affair, a colouring contest was held for children between the ages of four and seven.

StarLIVE is a free event organised by The Star. To receive updates on the next StarLIVE, email us at starlive@thestar.com.my