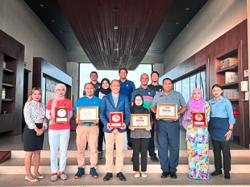 WHAT once stood testament to Kuala Lumpur’s railway history has now crumbled as a 110-year-old wall was partially destroyed some three days ago.

The 15m wall, located in front of the AgroBank Malaysia headquarters in Lebuh Pasar Besar, had a section hacked into it by construction workers working on a nearby building.

The wall was kept in memory of the history of the place as the Federated Malay States Railway and Yard was built there in 1905.

The adjoining building used to house the railway headquarters and is now the National Textile Museum.

A StarMetro visit to the site yesterday showed workers salvaging the bricks from the damaged wall, while all access to the site was closed.

“In the early 1980s, there was an understanding with Agrobank, which was then Bank Pertanian, to keep the wall as it formed a very defining area of the city’s physical historical development.

“The compromise then was that the infill walls were removed to allow visual penetration of the building.

“This would give a clear view from the street and also gives visual impact,” he said.

Hajeedar, who is also a conservation architect, said it was the duty of the authorities to investigate the matter.

“How this destruction happened is for the authorities to find out and take action, especially Kuala Lumpur City Hall (DBKL) and the National Heritage Department (JWN).

“In any development project, there are sure to be appointed consultants who should be aware of working within a historic or heritage area.

“It was insensitive of the party responsible whether it be the developer or contractor,” he fumed.

“I know the area because I was involved in the restoration of the museum when it was the Selangor Public Works Department office.

“The area was known as the North Goods Yard where supplies from all over the country would be brought by train and stored there before being redistributed into the city and even as far as Kajang and Seremban.

“The South Goods Yard is where KL Sentral in Brickfields is now.

“The wall was a representation of not one class or one sector of people, but the workers’ contributions and their way of securing the goods yard.

“It has stood there for more than 100 years and now in the name of so called “development” it has been ruined. This is shocking.

“This is not merely for the sake of nostalgia, it is part of the physical evidence of our heritage and development of the country, from the muddy riverbanks to what it is today.

“In other countries, this type of relic not only becomes a tourist attraction but a cultural reference reflecting the quality of life and intellectual level of the population.

“I have alerted JWN on the destruction and somebody has to explain.

“If found that the party responsible is in violation of the National Heritage Act 2005, there are penalties that can be levied on them.

“We have the laws but as usual the enforcement has fallen to the wayside,” he said.

Meanwhile, Icomos Malaysia committee member Rosli Mohd Ali, who visited the site yesterday, said it was possible to restore the damaged portion of the wall.

“The main is thing is to ensure that all the bricks from the wall are kept intact.

“These are rare bricks as they were originally made in Brickfields and use the same material as those used for the Sultan Abdul Samad building and the textile museum.

“They are more porous than modern-day bricks because of the lime cement that was used to lay the bricks.

“However, research would have to be done to determine the composition of the cement mix,” he said.

He added it was difficult to estimate the cost of restoring the wall.

“This would require a specialised skill set and architectural know-how to return it to near its original state,” he said.

“As far as I know, there is no intention by DBKL or JWN to declare it as a heritage site,” he remarked.