Community building in Subang Jaya in dire need of refurbishment

1 As of June 1, the complex was closed to public until further notice. From its exterior, it is evident that the place needs upgrading, making it more welcoming.2 Though the pool condition is good, the tiles look old and dirty, and showers with yellow stained tiles.3 Many toilet doors have gone missing over the years. Though some have been replaced, those who frequently use them wonder when next it will be taken away, again.4 Another toilet near the swimming pool that has no door and mold has started growing on the walls.

KOMPLEKS 3K in SS 13 Subang Jaya looks like an abandoned and derelict building.

Stained walls, broken zinc, overgrown trees and peeling paint all point to the fact that the complex is in a bad state and in dire need of a makeover.

The toilets are in a bad state and while the swimming pool looked clean, the surrounding areas are in poor condition.

In one corner of the pool, broken wooden furniture could be spotted.

The gym was locked during our first site visit last month and looked like it had not been used for a long time.

On our second visit, a huge yellow banner proclaimed that the complex has been closed from June 1 until further notice. Some toilet doors have gone missing over the years.

Despite its deteriorating condition, the complex had been popular with Subang Jaya residents who make use of the facilities which include a squash and badminton court, mini stadium, restaurant and 3K hotel.

There is also a tennis court on the rooftop.

The hotel had been turned into students quarters but both the hotel and the restaurant are now closed.

Lawyer Vivian Kuan said she no longer goes to the complex as she finds it rundown.

The toilets, she said, are not clean or equipped with soap and toilet paper.

“I only go there sometimes to play tennis or badminton because there are other courts outside which are better equipped and maintained,” she said.

Y.S Yang’s first impression of the place stopped him from returning again. 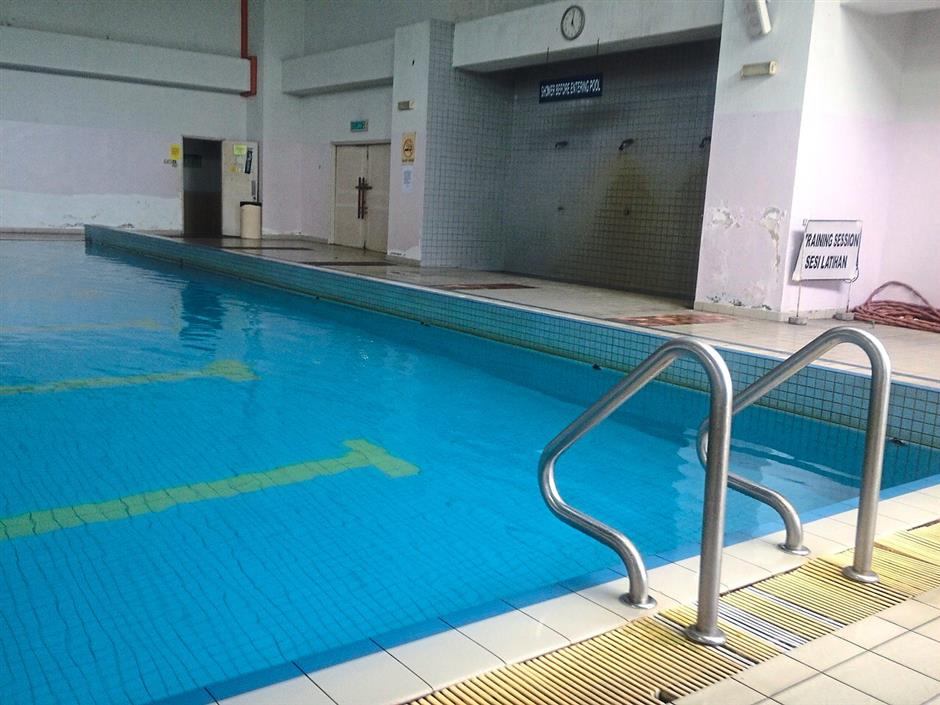 Though the condition of the pool is good, the tiles on the walls around it look old, dirty and stained.

“I went there to play a game of tennis. When I got there, the lifts were not working. Once we found the court, the next challenge was getting in because there was no proper entrance as the door was damaged.”

He said a hole was made in the wall for people to get in and out.

However, he found the condition of the courts adequate.

“The place has so much potential but it is not well-maintained,” Yang said.

Foo Siang Hock uses the swimming pool regularly but said that the 13-year-old complex is showing its age.

Foo said because of the lack of proper bathroom facilities, he returns home to shower.

“Some of the toilet doors in the changing room have holes, some toilet cubicles have no doors and some bathroom mirrors are also broken,” he said.

He said some of the doors have been replaced but the bathroom remains unpleasant.

A USJ resident who only wanted to be know as Phoon had turned up at the complex only to find it closed.

Phoon, who used to swim frequently at the complex, said she would have to find a new place to swim.

Though she finds the excessive chlorine smell unpleasant, Phoon has been swimming at the complex as it is cheap and close to home.

“The pool is too cold as it is located indoors,” said Phoon, adding that the toilets were in a bad condition and some shower heads were broken.

Subang Jaya assemblyman Hannah Yeoh said she had received complaints from residents about the poor condition of the complex.

“The Subang Jaya Municipal Council should take over the management of the complex,” she said.

MPSJ said the complex was closed as the contract of the private company managing it had ended.

MPSJ corporate planning department deputy director Muhammad Azli Miswan said the management of the complex was handed over to a private company in June 2002.

The council however, monitors conditions at the complex and forwards complaints to the company for action to be taken.

Muhammad Azli said the contract to manage the complex ended on April 27.

“MPSJ opened a new tender for interested companies which closed on May 18.”

“We have yet to appoint a new company to take over,” he said.