Hard at work: Women flipping capatis during the feast day at the Malacca Gurdawara Sahib. Photo: A Malex Yahaya

MALACCA: They came from all corners of the country as well as from across the causeway and overseas to Malacca’s only Gurdawara Sahib Complex along the upper reaches of Jalan Temenggong to commemorate the 43rd Yaadgiri Semagam (death memorial prayers service) of the much revered His Holiness Sant Baba Sohan Singh Ji.

Born Bhai Udhai Singh in June 1902 in Chathwalla in Punjab, India, the would-be Sant (His Holiness) first came to Malaya in 1926 and was stationed at the Seremban Sikh Temple.

Well versed in religious Punjabi poetry and the Sikh teachings of the Gurus, he moved to Malacca in October 1928. He found the town’s quaintness and historical background fascinating and soon made it his base while propagating the Sikh faith and teachings to the other parts of the country as well as Singapore. 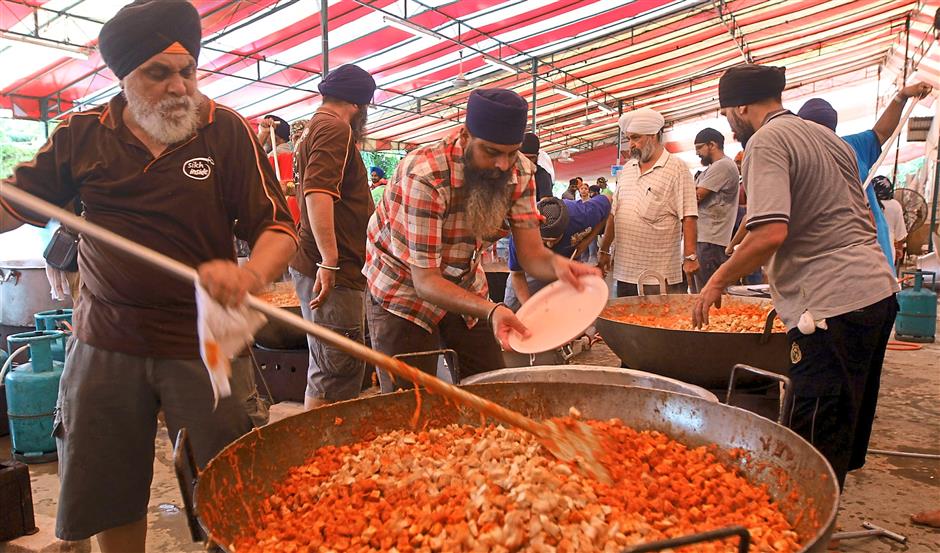 Male volunteers chipping in with service in the making of a bean curd delicacy.

Subsequently, his name became household within Sikh communities nationwide, Singapore and the South-East-Asian region in general.

In 1964, he made visits to all Sikh temples in the country, then numbering 73.

However, poor health forced His Holiness to slow down from around 1970 onwards.

His body was brought back to Malacca for cremation and remains scattered into the Straits of Malacca while a memorial was perpetuated at the local Sikh temple inner sanctuary.

Till today, a four-day celebration during the third week of May renders annual commemoration of the eminent Sikh priest’s passing and tribute of his wholehearted dedication to the spread and preservation of Sikhism throughout Malaysia and Singapore. 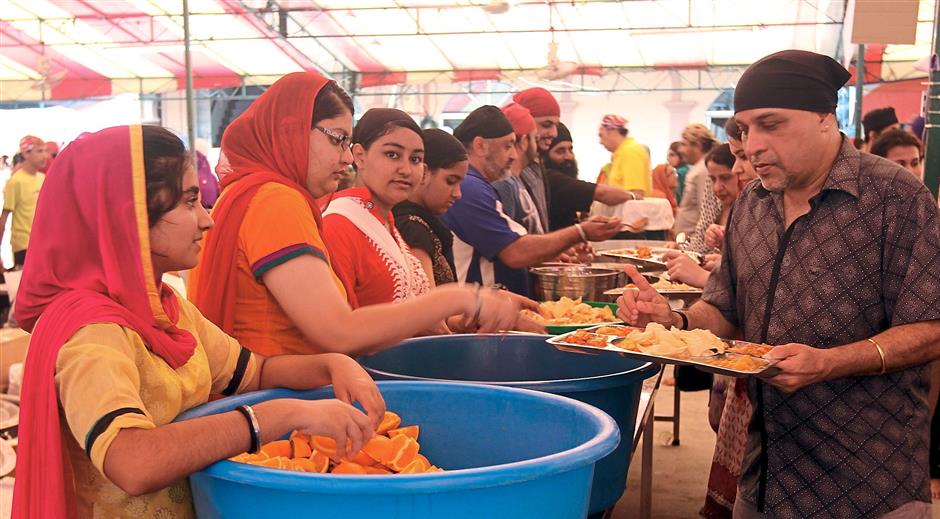 Housewives serving vegetarian meals to the many devotees and pilgrims who turned up for the festivities.

According to Malacca Sikh temple manage Ranjit Singh, this time around close to 70,000 pilgrims, devotees, visitors, local and overseas tourists thronged the festivities held principally at the temple compound where a large cafeteria-like shelter and merchandise stalls were also erected.

He said: “Apart from the religious aspects where five priest from India, locals and a good number of raaghis (religious hymn singers) from Scotland, India and the domestic front were involved, the other events included the serving of free vegetarian meals, desserts and traditional refreshments thrice daily, a blood donation campaign coupled with over 70 canopied stalls sited within the temple compound and along the adjacent main road selling a host of merchandise ranging from clothes and fashionable accessories, religious articles and books to audio and music and dance and song video cassettes, all at bargain prices”.

Ranjit also noted that many volunteers took turns to render serving, cooking and washing up services (termed sewa for the Almighty) by way of helping to prepare, cook and serve food and refreshment.

For the non-Sikhs and the uninitiated, the festivities also provided opportunities to taste authentic traditional Punjabi vegetarian cuisine and a host of delicacies and cooked foodstuffs, several of which are seldom seen in the market on normal days, he added.