Murals for SS2 back lanes

Promoting art: (From left) Artist Tang Yeok Khang, Yeo, Lee, Yap, together with the duo from Kelseyz X Violet — Violet Tan and Kelsey Lor. The duo had even rented a skylift at one point to properly paint their wall art piece, titled ‘Stay Under Same Roof’.

EIGHT side-lanes in SS2’s commercial centre will be transformed under the “Bestnya Malaysiaku” wall art competition.

The project was initially supposed to have taken off last year but painting was delayed due to the rainy season.

“The competition received 109 initial submissions including rough sketches and this was narrowed down to 20,” said artist June Yap, one of a panel of four consultant artists for the project.

This was further reduced to eight after some shopowners decided to pull out.

“We aim to promote art while at the same time, rejuvenate SS2 through this project,” said Yeo. 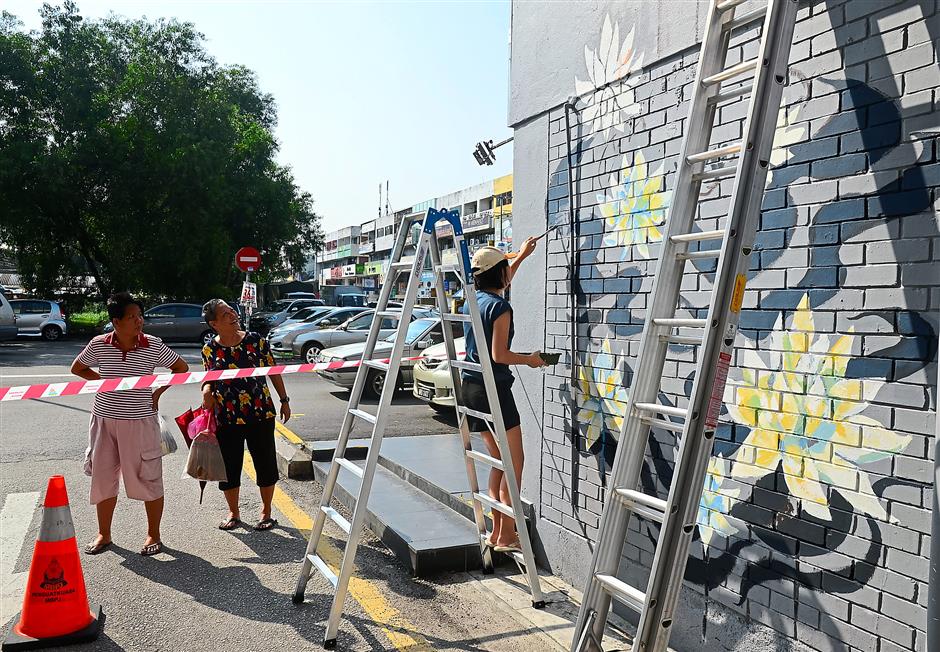 Street art: Two women on their morning shopping run stopping to admire the painting of ‘Freedom’, on the side-lane wall next to the Crab Factory in Jalan SS2/64, by King and Queens.


Lee said the selected lanes would also be lit-up with LED lamps as both a safety measure and to allow pedestrians to view the wall art at night.

The side-lanes will be sealed off during weekends so that the artists can work on their projects.

Art student Chua Teck Ming’s spray-paint/acrylic pen work is titled “Bestnya Malaysiaku” and will be displayed on the wall opposite Kelsey Lor and Violet Tan’s “Stay Under Same Roof”.

“I just finished my third year at the Malaysian Institute of Art,” said Chua,

Freelance illustrator Ellie Yong, of the team “Kings and Queens”, said this was the first time she was doing such a large-scale project.

“I have done murals before but this is quite large, and I am pretty excited about the project,” she said, while painting her team’s work “Freedom”.

SS2 resident David Lim, who was passing by, hoped the project would help promote art.

“Nowadays so many children are glued to their tablets and phones, it would be nice if they could look up for a minute or two to admire some real art once in a while,” he said.