Six young Iranians arrested for singing and dancing along to Pharrell Williams' hit tune Happy in a YouTube video have been released after social media protests.

Six young Iranians arrested for dancing on rooftops to Pharrell Williams’ hit Happy in a video that went viral on the Internet have been freed on bail, one day after they were detained for what police classified as "obscene behaviour". The release has been confirmed by Tehran-based fashion photographer Reihane Taravati, who along with her friends was arrested for what Tehran police chief Hossen Sajedinia called a “vulgar clip which hurt public chastity”.

“Hi I’m back, thank you @pharrell and everyone who cared about us," Taravati wrote on her Instagram post. "Love you all so much and missed you so much.” She was allegedly shown on state television Tuesday night repenting for the homemade video that was posted on YouTube last month and shared widely on Facebook and Instagram. Recorded on a smart phone, the video shows three girls – not wearing headscarves, as demanded by Iran's Islamic law – dancing in a room, on rooftops, and in secluded alleys alongside three young men to Williams’ Happy tune. In the clip, the six also lip synch to the song, imitating the official video of the international hit. The clip has since gone viral and been viewed more than 500,000 times.

Their arrest caused outrage among fans of the song, who took to social media to denounce the heavy-handed response by the Islamic Republic to a piece of harmless fun. Taravati also thanked Williams for showing support during her brief detention. He had criticised the treatment of the young Iranians on Twitter, saying: “It’s beyond sad these kids were arrested for trying to spread happiness” – referring to the idea behind his original video of dancing in the streets and being happy. 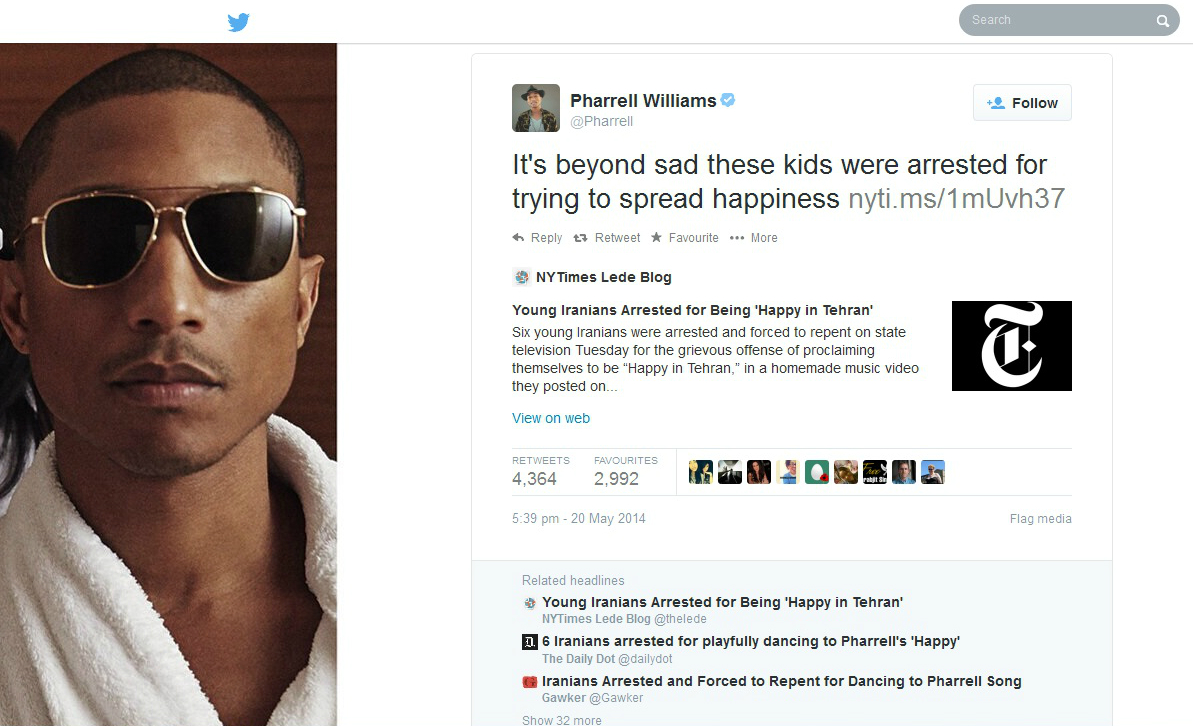 The Iranian authorities have yet to confirm the dancers’ release, but the International Campaign for Human Rights in Iran (a group based in New York) says the video's director, Sassan Soleimani, is still being detained and is facing an array of charges including “deceiving” the group. It also quotes a source close to the family of one of those arrested as saying they have been told they will be prosecuted.

The reports of their release came amid an apparent message of support for the group by Iran’s President Hassan Rouhani, who has championed Internet freedoms in a country that has sweeping bans on social and news media sites. @HassanRouhani, an English Twitter account believed to be run by his close aides, quoted the president from a speech in June 2013 shortly after his election: “#Happiness is our people’s right. We shouldn’t be too hard on behaviors caused by joy.” President Hassan, a self-declared moderate, has long claimed to be for more social freedoms in Iran. But his push has been opposed by hardline traditionalists that hold sway in the establishment. The incident has highlighted the struggle between Iran's ultra conservatives and those who hope the President, who has eased the country's antagonistic stance with the West, might also relax the Islamic Republic's social strictures.

Iran's state-run TV broadcast a programme on Tuesday, apparently showing the six expressing regret. "They had promised us not to publish the video," said one of the women. Tehran's police chief said he  ordered the arrest of the six youngsters because they had helped create an "obscene video clip that offended the public morals and was released in cyberspace," the ISNA news agency said. The report of their arrest on Tuesday sparked a media frenzy and a storm on social media, with many Iranians expressing shock and some observers questioning whether it was a “crime to be happy in Iran”. Dancing is prohibited in the Islamic republic, while mingling with the opposite sex is strictly frowned upon. Conservatives are wary of young Iranians abandoning the values of the Islamic republic in favour of a Western lifestyle – a phenomenon authorities and leaders say is part a “soft-war” against Iran.

It's not the first time young Iranians have used social media sites to buck social restrictions. A Facebook page entitled "My Stealthy Freedom", where Iranian women can send in pictures of themselves without their hair covered, has garnered 331,000 likes. "They arrested the Happy kids because it was easier than arresting women from that Facebook page," says a young Iranian from Tehran. – AFP/Reuters

Malaysian architect paints stinking toe pods and installs them in a KL park
Malaysian who helped displaced Ukrainians in Poland came away a changed man
How Malaysians are making smart green choices in their lives
How US cities are pushing the homeless to live in tent camps
From fishing to birdwatching, Gen Z is getting into nature hobbies
Malaysian DJ scales Mt Kinabalu in Iron Man suit to raise awareness on DMD
Gen Zers are embracing their 'grandma era' with knitting and herbal tea
Malaysian mother of four wins design award for animal-themed armrest cushions
The risky business of Amazonian tree climbers
The Malaysian ghost hunter who live streams paranormal activities online