Datuk Seri Dr Zakri Abdul Hamid’s list of achievements is staggering, yet he remains ever so humble and down to earth.

BIODIVERSITY expert Professor Emeritus Datuk Seri Dr Zakri Abdul Hamid is proof that it is never too late to do your part for the environment. 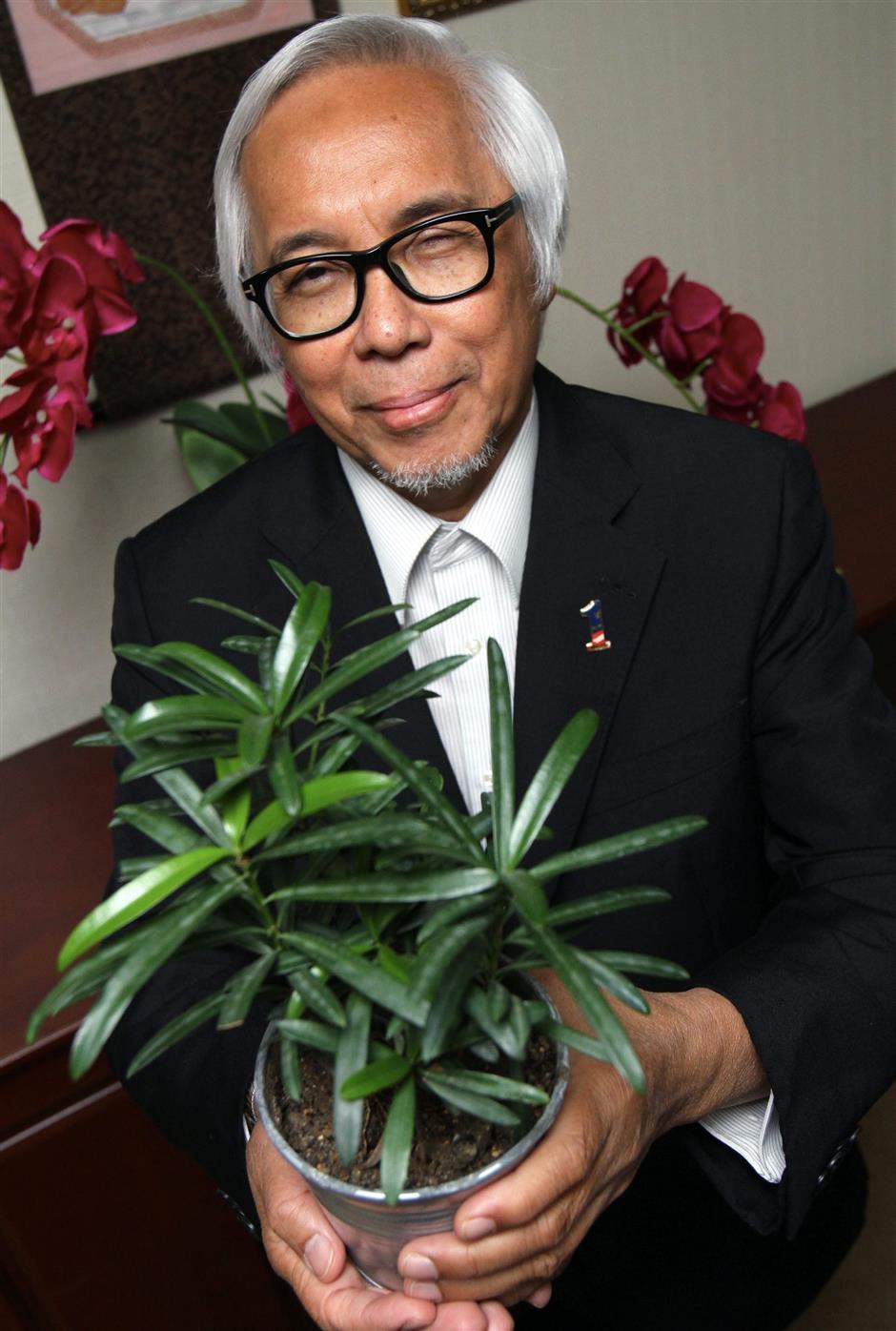 At 66, he is a tireless advocate of environmental issues that impact biodiversity, policies and education for sustainable development. His dedication has paid off handsomely – the eminent scientist has been awarded the prestigious Zayed International Prize for the Environment.

The sexagenarian – who is Science Advisor to the Prime Minister – has been named a recipient of the Zayed award in the Scientific and Technological Achievement category. The researcher shares the award – which carries a US$300,000 cash prize – with Indian scientist Ashok Khosla. The inauguration award ceremony will take place in Dubai on May 7.

“I didn’t know anything about the award, so it came as a pleasant surprise. I am thrilled and excited, as it is a recognition of the work I’ve done, especially biodiversity. It is gratifying to know that Malaysians are passionate about sustainable development,” said Zakri, at his office in the Prime Minister’s Department in Putrajaya recently.

The award recognises and encourages environmental achievements that have substantial impact on policies and actions of sustainable development. On website zayedprize.org.ae, Zakri is described as “instrumental in developing a number of the (2005 Millennium Ecosystem Assessment) report’s key findings, including the fact that humans have changed ecosystems more rapidly over the past 50 years than in any comparable period of human history.”

“This year, Prince Albert II of Monaco was named the global winner of the Zayed International Prize for the Environment Award. It is an honour to be included among the ranks of such distinguished world figures,” said the senior citizen, who has garnered the Langkawi Award for outstanding contribution in the field of environment (1998) and the Rotary Research Foundation Gold Medal (Agricultural and Biological Sciences, 1999).

Our homegrown talent is also noted for his work as co-chair of the 2005 Millennium Ecosystem Assessment report – a ground-breaking study with over 2,000 individual authors – in which he was instrumental in developing a number of the report’s key findings.

Zakri has an illustrious career where global environmental leadership is concerned. He is the founding chair of the United Nations Intergovernmental Science-Policy Platform on Biodiversity and Ecosystem Services (IPBES) and is also one of the 26 members of UN Secretary-General Ban Ki-moon’s elite Scientific Advisory Board (SAB). 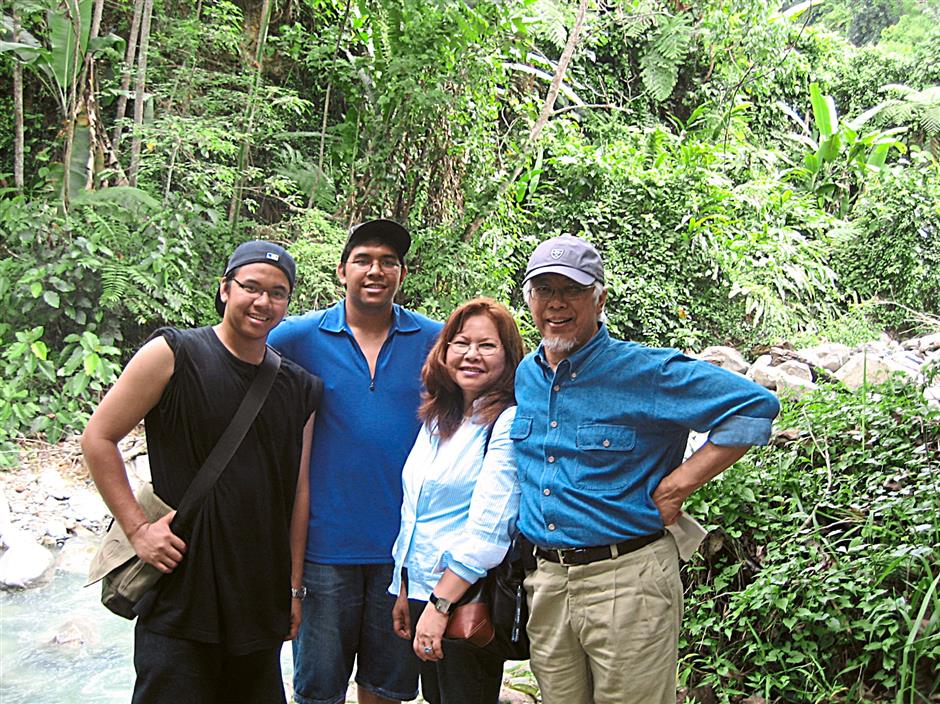 Despite such huge responsibilities, the friendly educator enjoys his job, stating that the key to success is to have fun and enjoy the journey along the way.

“I love what I do. Most of the time, especially at this stage of my career, I treat my job as a hobby. There’s also a sense of conviction that something needs to be done to improve the environment. While each job may have its fair share of challenges and entails a lot of travelling, it’s my dedication to the cause that fuels my passion.

“Besides advising the UN secretary-general on sustainable development and IPBES, I have also been invited to serve as a member of a number of board of trustees around the world, such as the Institute for Global Environmental Strategies in Japan, Iwokrama International Centre for Rainforest Conservation and Development in Guyana, Future University in Sudan, and Arab Fund for Economic and Social Development Fellowship Program in Kuwait. I was recently appointed a member of the board of trustees for the Mahatma Gandhi Institute of Education for Peace and Sustainable Development, New Delhi, and I’m a board member of the newly-founded African Sustainability Centre in Nairobi. It’s my passion that keeps me going,” said the environmentalist from Bentong, Pahang.

During the 30-minute interview, one could sense that the researcher is very passionate about sustainable development. And if time had permitted, Zakri would have gone on to discuss pressing issues concerning climate change, environmental degradation, urban sprawl and other dimensions of global changes.

“The key component is nature and what can be done to sustain the planet. My job revolves around meeting leaders where negotiations are made. It is really enlightening to meet leaders with similar interests in environmental issues. We all share the same conviction to do something noteworthy. It’s inspiring to meet scientists, politicians, captains of industries, non-governmental organisations and major stakeholders who share a similar interest in the pursuit of sustainable development.

“More awareness needs to be created to build awareness on sustainable development,” said Zakri, who was formerly deputy vice-chancellor of Universiti Kebangsaan Malaysia (1992-2000) before being appointed director of the United Nations University of Advanced Studies in 2001.

When asked what drives his pursuit in finding solutions for sustainable development, climate change, environmental degradation and urban sprawl, Zakri smiled and said: “It’s exciting to be able to contribute ideas to the global community on behalf of Malaysia. It’s equally interesting being at the very heart of the science-policy nexus where our ideas can help policymakers to carve out better strategies and programmes, especially in areas concerning biodiversity and ecosystem services. The public needs to be aware of the implications of ecosystem degradation, which are reaching alarming levels.

“Biodiversity and ecosystems are like the library of life. Trees, plants, animals and micro-organisms are the very essence that provides us with life. Although food, water and a host of other services are derived from the ecosystem, ecosystem services are being degraded at an alarming rate. The 2005 Millennium Ecosystem Assessment report states that almost 60% of ecosystem services (there are 24) are being threatened. We are losing biodiversity at an alarming rate. There should be more focus on this issue to ensure a sustainable future.”

To stay fit at his age, Zakri takes time out of his schedule to exercise and maintains an active lifestyle. He enjoys brisk walking at the Suria KLCC park and swims laps in the pool at least twice a week. Even when overseas, he makes it a point to exercise as regular physical activity benefits body and mind.

“It is important to have an interest in whatever you do. Senior citizens must realise that health is gold. Swimming is my pre-occupation. My benchmark is quite simple. If I can complete 20 laps in 45 minutes, I’m healthy,” said the aqua baby, who swims at the Aquatic Centre in Putrajaya.

“To stay healthy, avoid smoking and watch your food intake by consuming less oil and sugar,” he added.

The father of five children, aged between 22 and 35, says it is equally important to have a good balance between work, family life and a healthy diet.

“Enjoy your work, indulge in physical activities and have a good family life. Thankfully, I have a very supportive wife and children who understand my job scope and responsibilities. I often bring along my wife, Datin Seri Atom Yem, 62, on my numerous trips overseas.”

Zakri has a voracious appetite for reading. He enjoys the novels of John Steinbeck, Ernest Hemingway and Yukio Mishima. He also likes the novels and short stories of his uncle, the late national laureate Keris Mas, whose stories revolve around their village, Kampung Ketari in Bentong, Pahang, and the beautiful works of national poet Muhammad Haji Salleh. Besides catching up with work, he whiles away the time by listening to the vast collection of music which he has amassed on his iPod. 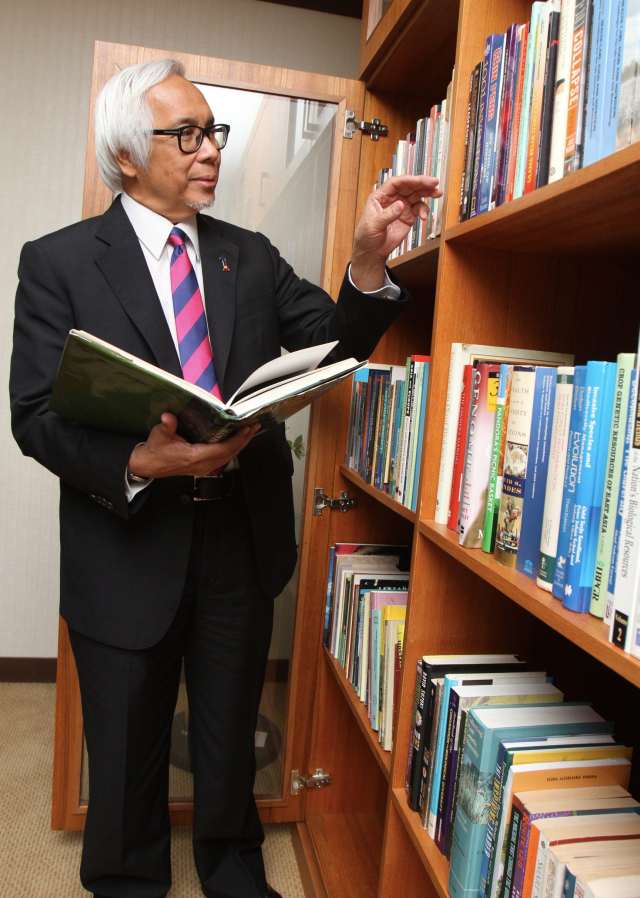 Zakri has a voracious appetite for reading. – IZZRAFIQ ALIAS/The Star

He enjoys the tenor of Pavarotti and Andrea Bocelli, the guitar strings of Carlos Montoya and Ali Farka Toure, the beats of the Beatles, and Dolly Parton. Now and then, his nostalgia for home is soothed by the songs of Ramli Sarip, Alleycats, The Blues Gang and Indonesian singer Tantowi Yahya.

Over the years, the scholar who had been promoted as a full professor at the age of 37, has published extensively in peer-reviewed journals in areas related to plant breeding and biodiversity.

Given Zakri’s life-long commitment and immense contributions to the environment and education, he is certainly a deserving recipient of the Zayed International Prize for Environment award.