Arsenal fan Peter Anderson is on a trip around the world to get fellow fans to support his cancer cause.

ARSENAL fan Peter Anderson is a man with a mission. A lot of people have visions and missions, so what’s so special this time, you ask?

Well, he is couchsurfing his way around the world to meet fellow Arsenal fans while raising funds for the Triple Negative Breast Cancer Foundation. To his surprise, there are Arsenal fans (often referred to as Gooners) in every nook and corner of the continent!

“I’ve been relying on the goodwill of fellow Gooners to put me up. It’s not that I’m a Scrooge. It’s really just a way for me to test the unity of the global Arsenal collective. Of course, people can also read about my successes and failures in my blog,” says Anderson, who is in Malaysia at the moment.

The 29-year-old Brit from Oxford became a fan at age 10 when he watched the 1995 UEFA Cup Winners’ Cup Final contested between Arsenal of England and Real Zaragoza of Spain. They lost the match but the kid was hooked.

However, he only became a diehard fan in 2000; his love was cemented when Arsenal went on a record 49 consecutive top-flight league games unbeaten from May 2003 to October 2004. It wasn’t until 2009, however, when Anderson moved to Montreal, Canada, for work, that he had his first experience with fans abroad.

“I didn’t even think people watched English Premier League soccer in North America, but there I was with a couple of fellow fans, eating breakfast and watching us get spanked by Manchester City. At that point it was clear to me that I would still be able to follow Goonerism anywhere in the world without having to resort to unreliable Internet streams,” he says. 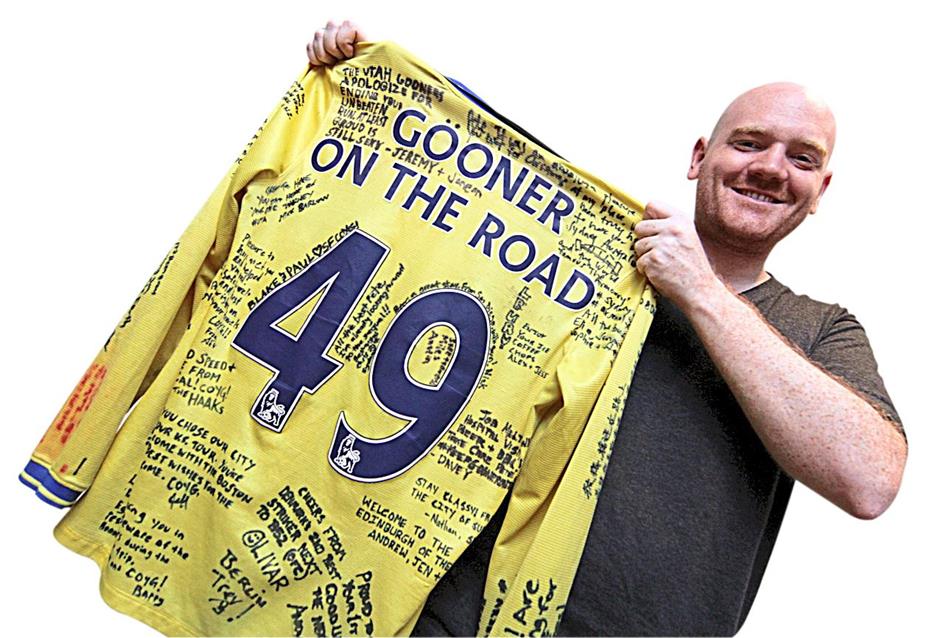 Peter Anderson has collected signatures from fellow Arsenal fans around the world. The Star/Raymond Ooi.

After spending two years there working in the information technology sector, Anderson returned to Britain in 2011 only to discover that his mum had been diagnosed with a rare, fast-spreading strain of breast cancer called triple negative breast cancer. His world crumbled. In February 2013, she succumbed to the disease.

“My mum and dad had been together for 33 years and her death was devastating for the family. To me, life couldn’t get any worse. I lost my job three weeks later – I was in a bad place and I needed a new challenge,” he shares.

“My best friend suggested travelling to see the world, reflect and discover myself. But I asked myself would I still be able to watch the Arsenal matches while travelling?”

Anderson had no clue how the idea would materialise. He had a limited budget and was keen on travelling only during the English Premier League season, which runs from August to May. And, he also wanted to raise US$15,000 (RM49,200) for the foundation (his mum was one of the forum members) by asking people to donate on his blog via a link that goes directly to the foundation’s website.

“It wasn’t until I was having a few drinks with fellow Gooners that I thought of a master plan, a plan that could only be conceived whilst intoxicated, a plan that would make me itch with excitement and fear at the same time. What if I could travel with the goal of watching every single Arsenal match, regardless of where it would be in the world?” Anderson being interviewed at Arsenal's homeground at the Emirates Stadium in London. Photo courtesy of Peter Anderson.

He charted his course, bought his flight ticket and began his journey. But before that, Anderson contacted the Arsenal Football Club, who was delighted to give him exposure.

The club presented him with a camera to record his trip and a personalised “away” team jersey with the number 49 and words “Gooner On The Road” imprinted on it. He was also asked to write about his travels on the official Arsenal website, www.arsenal.com.

When he put the word out on couch surfers, searching for accommodation, the fan response was overwhelming. Still dazed, he says, “It’s amazing how mutual love for a football club can bring people together.”

Anderson’s first stop was the home ground of Arsenal: The Emirates Stadium in London. He watched the game and made his way to the rest of Europe.

To date, he has travelled to North America, Canada, Australia, New Zealand, Hong Kong, Singapore, Indonesia and Singapore. After Malaysia, Anderson will continue his journey to Cambodia, Vietnam and Taiwan before heading home.

He says: “It’s been awe-inspiring and great to learn about different cultures. In New Zealand, it was difficult to find Arsenal fans because rugby is bigger. But I was on an Arsenal podcast and someone contacted me to offer me his couch.

"People have been really kind, generous and very accommodating. I don’t think I would have been able to meet locals that easily if I didn’t couchsurf. The fans abroad are definitely prouder of the club that the ones in Britain.”

It has been a learning experience and Anderson realises while he misses home, he cherishes the moments. And he has discovered a passion for writing.

“Before I departed London, I envisioned myself falling sick from eating different foods, and losing weight from backpacking and hiking – but, nothing like that happened. In fact, I have gained weight and the jersey is becoming tight! Fans buy me beer all the time!” he says, laughing.

Thus far, Anderson has raised around US$11,000 (RM36,000) and is confident he can meet his target before his travels end. He has slept on more than 50 couches and asks that his hosts sign on the yellow jersey, though space is fast running out.

He says: “Mostly, couchsurfers have provided me a place to stay but there have been a few times when I had to stay in hostels while moving from one city to another and for some time alone.”

Once he completes his mission, Anderson intends to write a book on his trip and donate a portion of the proceeds to charity.

Initially, his dad wasn’t thrilled about his son’s travels but he is very proud now.

“The loss of my mum has been a little easier to handle because it has been therapeutic talking about her to other fans. I know she would’ve been proud of me because she loved to travel as well.”

For the last leg of his trip, Anderson hopes to be back in London to catch Arsenal’s last home game for the season. “Then, I would’ve gone a full circle and completed my journey.”