There's something about Sitka

This trendy new restaurant is doing away with our collective obsession with imported produce, one dish at a time.

HAM from Spain. Spices from Peru. Fish from Japan. When it comes to food and everything else in Malaysia, the perception of quality these days seem to have a lot to do with the number of air miles clocked. But what do co-owners of Sitka Restaurant Jenifer Kuah and Christian Recomio have to say to that?

With their enlightened approach to eating and their love of local produce that borders on the evangelical, the irreverent duo are strong proponents of farm-to-table dining and beyond. Case in point: Recomio is known to forage for food, specifically edible wood sorrels, outside the restaurant along Jalan Batai.

He isn’t just blindly following a fad that’s recently taken European and Australian kitchens by storm. By crafting their menu around locally-sourced ingredients, Recomio and Kuah hope to fix what’s been missing from the menus of Kuala Lumpur’s upscale restaurants.

“You know it’s sad,” says Kuah. “I’ve travelled around the world and dined in top restaurants, but I still find that our country has some of the most incredible produce around. Malaysians themselves don’t seem to know or care.”

A conversation with the 42-year-old is a lesson in how much things have changed in the country since she was a child. “While I was growing up, everything was super fresh. People didn’t buy their chickens from supermarkets; they go to the market to get freshly slaughtered chickens. You can actually taste the difference.” 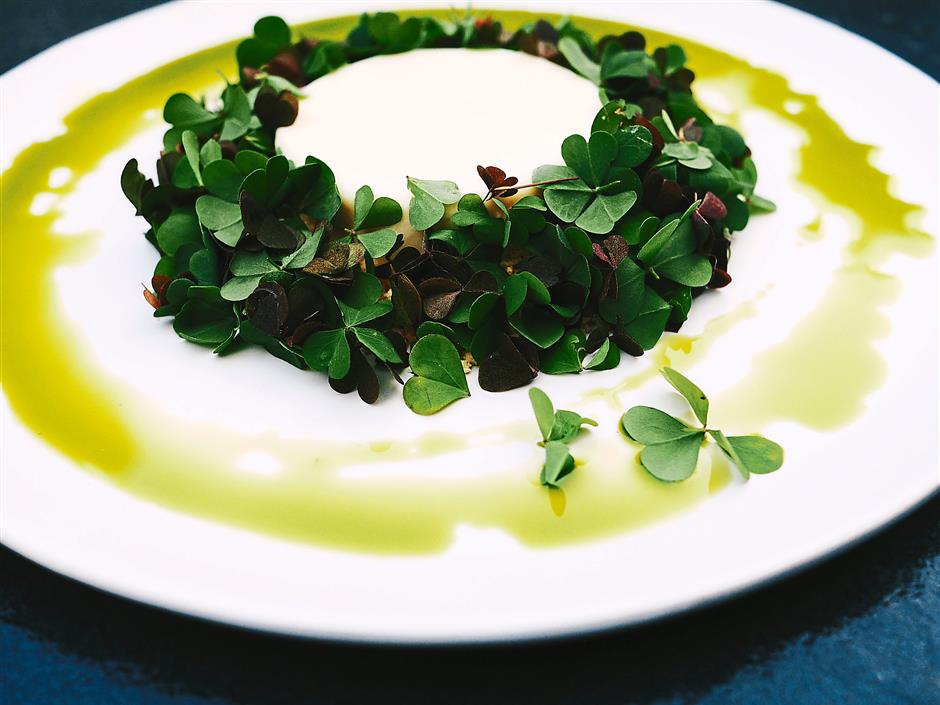 End your meal on a sugar high note by ordering this white chocolate with Thai basil and wood sorrel.

A former lawyer and bona fide epicurean, Kuah has been in the business of dishing up pleasure on a plate for eight years. After building a considerable fan base with her first restaurant, Food Foundry, Kuah opened a small number of F&B establishments scattered around the suburbs of Petaling Jaya and in Kuala Lumpur.

The idea for Sitka simmered in her head for some time; it was a matter of looking for the right partner who could help bring it to fruition.

Kuah chanced upon Recomio over dinner at the Transparent Apron, an underground Supper Club. A Scottish chef and founder of the acclaimed Moonfish Cafe in Aberdeen, Recomio happened to be visiting family and friends in town.

After talking to each other, the pair realised they shared the same vision: to start a restaurant that served haute cuisine at affordable prices and make eating well more accessible to KL’s denizens. A talented chef, Recomio was more than familiar with the farm-to-fork concept; after all, he was based in Scotland where sustainable food practices have become the new buzzword and “most restaurants get their produce within the vicinity of a square mile.”

That was two years ago. Recomio has since relocated to Malaysia, and Sitka was launched last April.

Before that, the duo scoured highlands and lowlands to sniff out the best and freshest produce Malaysia has to offer. Explains Kuah: “We wanted to establish a direct contact with the producers and see the ingredients for ourselves – something, apparently, other profit-driven restaurants have never done.” 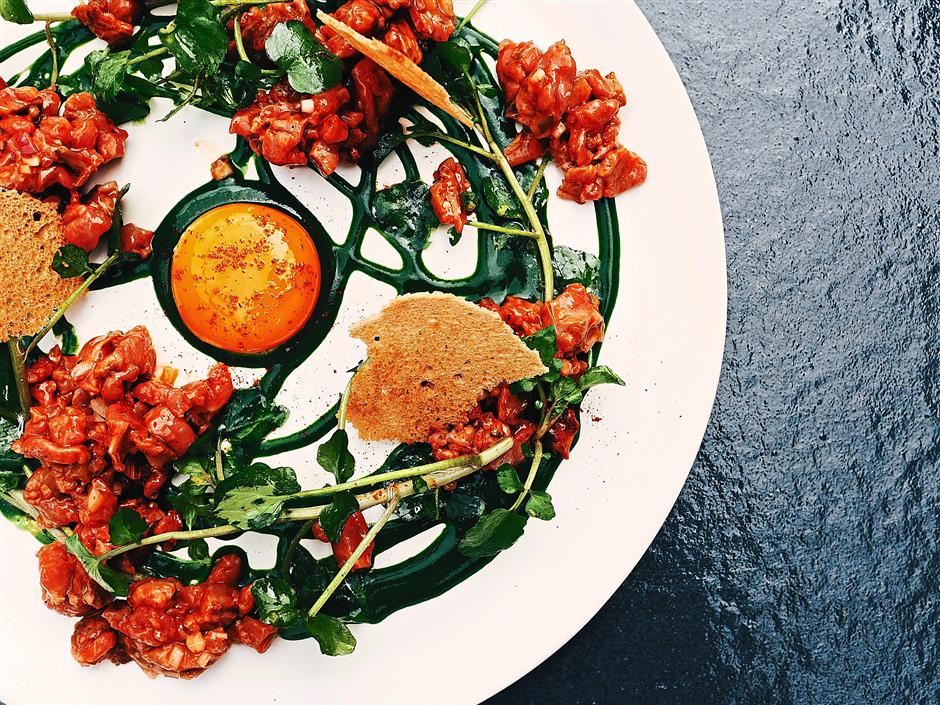 A playful rendition of beef tartare, Recomios raw beef is delicious, both to the eyes and tastebuds.

Their request was met with suspicion.

Bleak as the situation seemed at first, it paid off. The duo now enjoy a close working relationship with several independent producers who supply them with organic fruits, vegetables, poultry and even cheeses. “The only high quality ingredients we couldn’t find were beef and scallops so we import those,” says Kuah.

Come Friday and Saturday night however, the lights dim, the mood music comes on and this casual 40-seater joint transforms into Test Kitchen, a smoulderingly sexy supperclub-slash-gastronomical hangout.

Not everyone gets Sitka’s ethos – KL can be an exasperating market – but those who do seem to fall into the category of writers, artists, and generally anyone who’s well read or well travelled.

The restaurant’s commitment to local ingredients translates to a limited, postmodern menu made up of three appetisers, nine mains (four small, five large) and two desserts – all subjected to the week’s harvest.

The magic happens backstage at Recomio’s Wonka-esque culinary lab where – after weeks or months of experimentation – he churns out elegant, inventive dishes built on clean, merging flavours.

The food, for the most part, is hard to fault because of Recomio’s monkish devotion to beauty and flavours. He’s learned from the best, having taken up employment in a string of restaurants across Europe as a means of expanding his culinary knowledge and repertoire. This included an unpaid internship in the top kitchens of Copenhagen for three months in 2012.

“This is where I feel I developed my own style and a better understanding of the produce that surrounds us,” says Recomio, who added that Japan is on the itinerary next year. 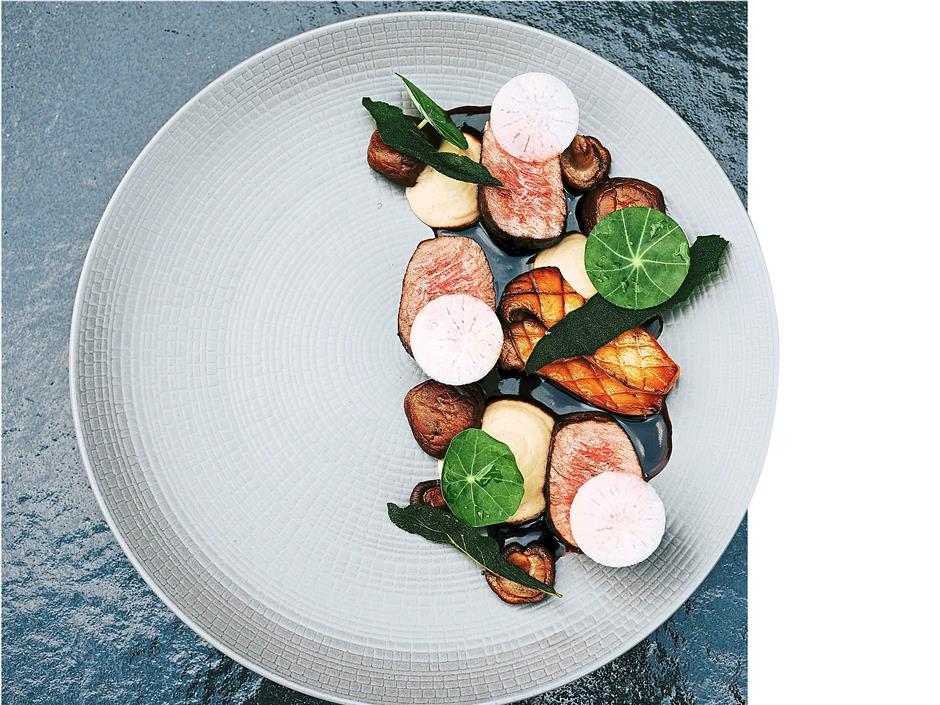 The chewy but flavourful angus steak is nicely charred and accompanied by water chestnuts, daikon and mushrooms.

Dinner begins with house-made bread paired with butter that’s been whipped with beef fat to yield an impossibly light and creamy texture.

For appetisers, there’s the linseed crackers. Artfully rendered and speaking directly of Recomio’s genius, these crispy, bite-sized snacks are embellished with tasty little orbs of avocado mousse and flash-fried kale.

Next come the ‘small’ plates; all deliver pleasures but – smothered with watercress and egg yolk, and flashing with lemon – the sliced raw beef is wonderfully fresh.

‘Large’ plates follow, as if to second the point. Sitting atop a bed of water chestnuts, daikon and mushrooms is the chewy but flavourful angus steak, seared to a rosy perfection.

Most surprising of all, however, is the sea bass. Crisped on the outside and flaky and moist on the inside, it’s hard to believe that the fish came from our very shores. Slick on some soubise sauce – Recomio makes a lighter version of this classic French sauce by thickening it with rice and then aerating it using a siphon – and it becomes the evening’s highlight. Aaah.

To finish: Recomio’s white chocolate dessert – made extraordinary by a generous drizzle of Thai basil and wood sorrel – extends the pleasures of the meal far into the night. 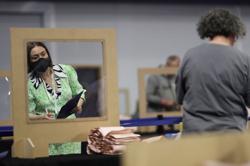