A Yunnan Province-based designer embodies the new generation of young Chinese architects who were educated in the West and are returning home to make a difference.

Like many of his ambitious and idealistic peers, Chinese architect Zhao Yang struck out on his own after graduating from the prestigious Tsinghua University in Beijing and working for a year for his graduate advisor. “I had no idea what kind of architecture I wanted to do. I just thought I was capable of doing anything,” Zhao says, chuckling.

Thanks to China’s building boom, it wasn’t long before the Chongqing-born architect snagged his first commission to design an office block. The project went well; the client loved his work and another job followed. But Zhao felt empty. “I wasn’t convinced by what I had done and felt I didn’t express myself,” he says. “I thought it's important to figure out what I really want from architecture.”

So rather than plunge into more projects, he applied to Harvard Graduate School Of Design in 2008. Fast forward to 2014, Zhao has under his belt a Master’s degree in architecture with distinction, earned critical praise for a project in Tibet, and received the 2010 WA Chinese Architecture Award from the Beijing-based magazine World Architecture.

In 2012, Zhao was chosen as the first architectural protégé of the Rolex Mentor and Protégé Arts initiative. Under the mentoring of Pritzker laureate Kazuyo Sejima – Sejima and Ryue Nishizawa co-founded the award-winning Japanese design firm SANAA – Zhao completed a centre for a fishing community affected by the 2011 Tohoku earthquake and tsunami.

Completed in October 2013, the Home-For-All Kesennuma project gained wide publicity and thrust Zhao into the spotlight. His recent works were exhibited at Fondazione Cini during the Rolex Arts Weekend in Venice in 2013. Zhao was of the speakers for the annual architecture conference Datum:KL 2014 organised by Pertubuhan Arkitek Malaysia (PAM). In the narrative of contemporary Chinese architecture, Zhao is part of a rising generation that's making waves in the global design scene. Young, ebullient and hopeful, these emerging architects effortlessly straddle the world of Western architectural influences and the reality of China’s rough-and-tumble urban development. They embrace challenge, they question the status quo, and yet they are sensitive to local context and traditions.

Zhao’s work, like the Niyang River Visitor Centre in Tibet and Shuangzhi Hotel in Yunnan Province, meld the old and the new by combining traditional construction techniques and materials with modern forms and functions. Many of Zhao’s predecessors from Tsinghua and among China’s hottest architects in Beijing – Hua Li of Trace Architecture Office, Xu Tiantian of DnA (Design and Architecture), Zhang Ke of ZAO/Standardarchitecture – favour small-scale projects that respond to regional flavours.

“My thinking can have some direct manifestation in small projects, be it in the rural or urban context,” says Zhao, 34. He is in some ways influenced by his seniors, especially Zhang Ke, also a Harvard alumni. When Zhao set up his firm in 2007, his studio was in the office building of Standardarchitecture which calls itself “one of the leading new generation design firms in China”.

“When it comes to drawings and criticisms, Zhang was rigorous,” says Zhao, who collaborated with Zhang on the Niyang project. “When we look at each other’s designs, we give really harsh comments at times. It was a good training period for me.” The culture of rigorous criticism prevails in Zhao’s studio today. The Niyang River Visitor Centre serves as a gateway to Brahmaputra Canyon, reputedly the world's largest gorge, and one of the main tourist attractions in Tibet. – Photo by Chen Su

The Niyang project was a turning point in Zhao’s career. Located at the gateway to Tibet’s Brahmaputra Canyon and the bank of Niyang River, the centre houses a ticketing office, a changing room for river rafters and toilets. The building adopts local materials like stones and Aga clay (a vernacular waterproofing material), and Tibetan construction techniques with 600mm thick load-bearing walls supporting a timber roof. Its geometric trait and irregular shape strive to engage the surrounding landscape in a dialogue.

After completing the project, Zhao hunkered down to write his manifesto. “The words flowed so quickly and fluently. Finally I felt I know what is the way to practise architecture. And for the first time I started to relate to this profession,” says Zhao, who was influenced to study architecture by his structural engineer father and architect admirerand a TV interview with IM Pei.

His ideas have become more coherent and things have started making sense.

“It wasn’t just about the project but the integrity of my personality and ideas,” Zhao explains. “For example, originality doesn’t originate from ideas because ideas always repeat themselves. Originality derives from a set of circumstances because it’s something that will never recur again. It’s this kind of awareness, of the important elements that you can bring or a sense of time in a project, that anchors architecture to its time.”

During his travels to Tibet, Zhao sensed the strong spiritual pursuits of the Tibetans and a culture inextricably linked to the landscape. “Everything is so strong, stark and absolute. When you look at the lake or the sky, it’s absolutely blue,” he says. “It’s very much related to how Tibetan Buddhism developed.”

Intrigued, Zhao delved into Tibet’s traditional architecture and Buddhism. “The wisdom from Buddhism inspired me beyond just architecture,” he says. Shuangzi Hotel sits on a waterfront site of two residential courtyards on Jinsuo island, a short boat ride from Dali City, Yunnan Province. The building is constructed mainly from locally sourced limestone rock and timber transported from the mainland.

After Niyang was finished, Zhao was offered a spot at Harvard. His two years there gave him a chance to “look at the world without fear and acquire a confident mindset”.

Sanaa’s Sejima and Ryue Nishizawa were among the motivational people he met at the university. “In my second semester, Sanaa came to give a lecture titled Architecture As Environment. It was so inspiring,” recalls Zhao, who changed his coursework after the talk. “Sejima’s way of responding to the environment is very strong and subtle at the same time. It’s about how her building influences the spatial quality of its surroundings. In the end, it’s all about how people experience the spaces.”

Post-university, Zhao returned to China, roped in a couple of partners and moved his studio from Beijing to Dali Prefecture in the centralwest of Yunnan Province. Dali is known for its ancient city and the autonomous prefecture’s population numbers around three million. “The Harvard experience really helped me as an architect. That’s why I had the courage to move to Dali,” Zhao says, smiling. Sejima later selected Zhao to be her apprentice in the Rolex Mentor & Protégé initiative, to work on the Home For All community rebuilding project in Japan’s Tohoku region.

Led by the 2013 Pritzker Prize laureate Toyo Ito – with help from leading Japanese architects Sejima, Kengo Kuma and Sou Fujimoto – Home For All provides gathering spaces for local townspeople displaced by the earthquake and tsunami of 2011. A series of buildings, each costing about US$100,000 (RM320,000), are being built across the area.

The project sits next to a harbour at a fishing port in Kesennuma. Zhao’s brief was to create a building that would serve as a communal site for the local fishermen. They could rest in the shelter, families could wait for them to return from sea, while the pavilion could be an ad hoc marketplace for their catch.

Zhao decided on an elemental concrete shelter that supports a pitched roof and three rooms that various functions: a glass-enclosed kitchen and dining space with sliding doors, an open wooden platform based on the concept of engawa (a veranda protected under eaves, the engawa usually skirts the perimeters of a traditional Japanese house), and toilet facilities.

Each room has a raised platform that doubles as a bench and is oriented towards the centre of the shelter. When seated on the platforms, people have to face each other.

“One of the locals, Takahashi-san, told me that fishermen like to look at the stars at night,” says Zhao, who spoke many times with the locals to get their feedback. So he included a triangular skylight in the centre that would direct their view to the sky. The skylight also helps to light up the interior by day.

The engawa is situated close to the water to allow people to enjoy the harbour view while resting. On market days, forklift trucks can transfer goods into the pavilion as the floor is on the same level as the ground. Meanwhile, a dome-like space created by the geometry of the galvanised steel roof and Japanese cypress plywood cladding evoke a warm and protective atmosphere inside the pavilion.

Zhao travelled to Kesennuma nine times over the space of a year.

“Even in Japan, the locals are not familiar with expressing their ideas to architects. At the first workshop only three people showed up,” recalls Zhao, who faced a steep learning curve due to language barriers and culture differences. “By the time we held the last workshop, 30 locals attended and they were very interested in the models and drawings we presented.”

Zhao submitted 10 proposals, from the first sketch to the final approved design. And as one local puts it, “We need a new dream for the future and this place will be at the heart of it.” 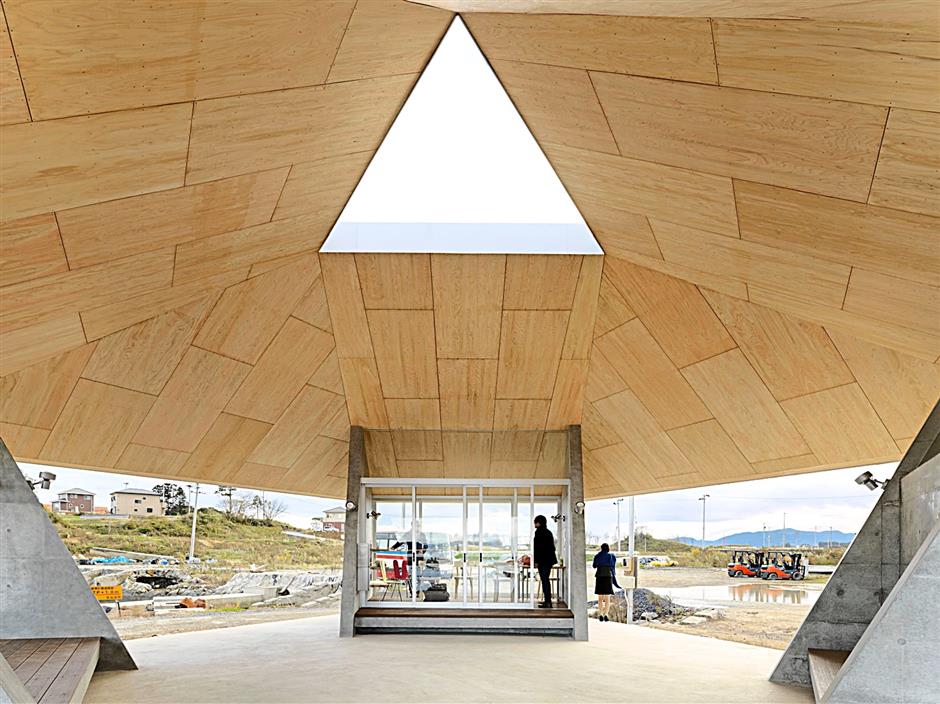 Home For All in Kesennuma: The geometry of the galvanised steel roof creates a dome-like space beneath and the Japanese cypress plywood cladding underneath creates a warm and protective atmosphere inside the pavilion. At night, the building glows warmly from within, like a lighthouse waiting for fishermen to come back – Photo by Jonathan Leijonhufvud

Collaborating with Sejima was a priceless experience for Zhao. She taught him about Japan’s design culture and showed him her construction sites at Inujima Island, which are part of the Inujima Art House project. “She has very strong instincts about the potential of a design. And she always says, ‘You have this potential, let’s use it to the maximum’, She never tries to put her own ideas into my work,” Zhao says.

Sejima’s design philosophy also inspired Zhao’s approach to the Kesennuma project. “It’s a sense of free space that is very friendly to people, and there’s never a point where you find this building is trying to show off itself. It tries to be friendly and generous, as a space and an environment for life to take place,” Zhao says.

So what has he taken from his Home For All experience?

“You have to be humble and modest. You have to work harder than the local architect, because you can’t assume you’re smarter than them, because they know much more than you do,” Zhao says. “Also as an architect, you not only change the physical landscape of the area, you change the lives of people.”

Following Kesennuma, Zhao is back in Dali to focus on his current projects and to figure out his practice’s future. “I want to realise more high-quality work, to know what is right and wrong, and to prove it,” Zhao says, convincingly.