From Russia with woof: Sochi's strays arrive in US ready for adoption

Thanks to the publicity they received during the Winter Olympics in Sochi, 10 of the thousands of the city's stray dogs made it to the US for adoption.

Ten dogs from Sochi, Russia have arrived at a Washington, D.C, animal shelter where they will be offered for adoption after the round-up of thousands of strays garnered international attention in the lead up to February’s Olympic Games.

Russian officials began the catching the dogs roaming the Black Sea resort city ahead of the opening of the games, leading to charges that the animals were being killed.

The dogs arrived at the Washington Animal Rescue League in a white Humane Society van on March 27.

“For us, these dogs are wonderful ambassadors for the street-dog issue that exists around the world,” said Kelly O’Meara, director of companion animals and engagement for Humane Society International, an advocacy group that partnered with a shelter in Sochi to bring the animals to Washington.

Since February, the 10 dogs have been cared for by PovoDog, a privately financed Sochi animal shelter that vaccinated and prepared them for the two-day trip to Washington.

The Russian airline Aeroflot provided free airfare to the strays, said O’Meara, explaining that the journey would have otherwise cost an average of US$2,000 (RM6,500) per dog. 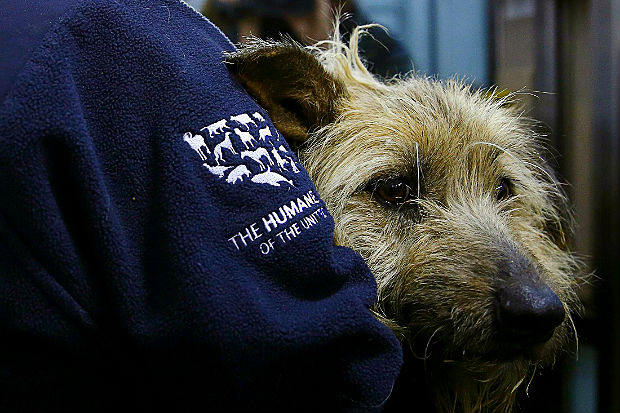 One of the 10 dogs transported from Sochi, Russia is brought into the Washington Animal Rescue League. – Reuters

“We’re very excited. They look like nice dogs and will make great family members,” said Bob Ramin, the shelter’s chief executive officer. He said the strays should be ready for adoption in about 12 days.

The Humane Society International wrote a letter of protest to Russian President Vladimir Putin during the games to protest the killing of stray dogs, though the International Olympic Committee denied that any healthy dogs had been euthanised.

A handful of Olympic athletes and spectators have personally transported stray dogs from Sochi to the United States, but the dogs in Washington are the only Sochi dogs currently available for open adoption in the country.

O’Meara said she is hopeful that Humane Society International can bring more strays in the future, noting that Aeroflot has promised to transport up to 100 dogs for free. – Reuters