Health trends come and go, but one post-birth fad is gaining a foothold in the United States among some new mothers who extol the benefits of eating their own placentas.

Convinced it helps to boost energy, produce healthy milk and ward off postpartum depression, the practice is catching on among mothers who shun modern medicine for natural care, or Hollywood celebrities eager to adopt new-age trends.

It is called "placentophagy" and it entails eating the iron-rich afterbirth in any form – liquid, solid or packed into a pill. The bloody, spongy organ provides the foetus with nutrients, oxygen and hormones via the umbilical cord during the 40-week gestation period.

Some midwives promote its nourishing virtues for mothers too.

"Not rejuvenate you so you can go to parties... just restore you when you feel like a used machine," she says, speaking over her kitchen sink in Washington where she prepares placenta pills.

For US$270 (about RM972), Booker, a 65-year-old with cropped hair and tattooed ears, processes and prepares the vascular organ into a course of capsules lasting several weeks.

The process of turning placenta into pills is perhaps more familiar to cooks than scientists. She cleans it, presses the blood from it and steams it before placing it in a dehydrator overnight.

The dried placenta is then cut into strips and put in a coffee grinder to turn into a powder she puts inside small capsules, a technique she learnt from a Chinese acupuncturist. There are no scientific studies on the number of new mums partaking in the practice and few on its effects, but that has not prevented the trend from taking hold in some circles, including among A-listers.

Clueless star Alicia Silverstone has tried it and swears by it. And Mad Men vixen January Jones tried it too, earning her the nickname "Mad Mom" in some American media.

The trend has even spawned cookbooks and a devoted army of recipe testers on mummy blogs who write about placenta lasagne, tacos or chocolate truffles.

Mother of seven Catherine says she wanted to try it after giving birth to her last child. She chopped her placenta into cubes and blended it with almond milk, honey and blueberries for an afterbirth smoothie.

She opted for a puréed version to "disguise the taste," she says, adding that she froze leftovers to be enjoyed later.

Placenta being a rare item, some mothers want to make sure none goes to waste.

For others, packing placenta nutrients into edible treats like chocolate truffles is preferable to taking vitamins.

"It seemed to be a good idea because I tend to forget to take my vitamins but I don't forget that I'm in the mood for chocolate!" says mother-of-three Melissa.

Booker maintains that the benefits of eating the placenta are also psychological, helping mothers to stave off postpartum depression that affects up to 19 per cent of women in the United States, according to the Centers for Disease Control and Prevention.

"It is one of the pieces of the puzzle that helps you to decrease the emotional roller coaster of the early postpartum period," Booker says, the pungent scent of cooked blood wafting through her house.

It is also believed to ease fatigue and anxiety in the tumultuous post-birth period, she adds.

But researchers are only starting to conduct comprehensive studies on the practice, which first emerged in the United States in the 1970s, according to Daniel Benyshek, a medical anthropologist at the University of Nevada.

Americans are believed to be among the first to eat their own afterbirth, he says, though dried placenta has been long used in Chinese medicine, prized by healers for its curative qualities.

Others have examined the effect in mammals, most of which eat afterbirth.

Psychologist Mark Kristal from the University at Buffalo found that mice experience less pain in the post-birth period if they eat their placenta.

But most studies about human benefits do not meet acceptable scientific standards, Benyshek says. Instead, most evidence is anecdotal. 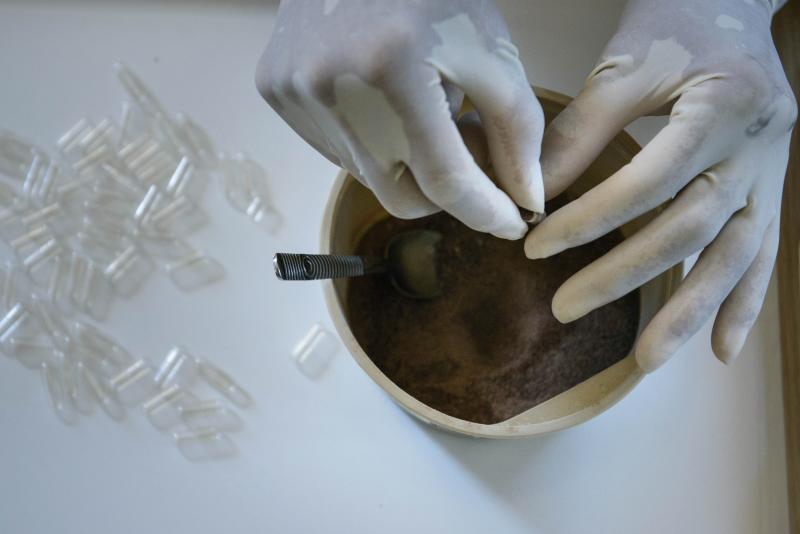 "There is a lot of positive feedback from women, including women who experienced postpartum depression," he says.

Based on a survey of 189 women in 2013 conducted by Benyshek, 98 per cent reported the effects of eating their own placenta as "positive."

He is planning to release a full study this summer based on research from 30 women.

Scientifically proven or not, many are embracing placentophagy as an essential post-birth ritual.

"The reason that I chose to do that it is that there is a history of depression and one of the purported benefits of course is that it helps bounce my hormones," says Melissa.

Fellow mother Laura Ransom from Las Vegas, Nevada, says she wished she had tried it earlier.

She took placenta pills after the birth of her third child and said it helped her manage a hectic schedule.

"I did not do this with my first two pregnancies and I can't express the night-and-day difference of my emotional and physical recovery," she says.

"The pills gave me energy, curbed my mood swings, actually made me really happy, and helped me to handle things in the midst of adding number three to our family after a move and my husband starting a job." – AFP Relaxnews

Click next for a video on the subject of eating placenta.