Dealing with autism: Doing what it takes

This dad took on the task to learn about autism to deal with his son's condition. He has now set up a learning centre for children with similar disabilities.

QUITTING his job to set up an autism centre made perfect sense to Mohd Fakhri Nor Affandi even though he knew next to nothing about special needs education. He wanted to help his eldest son Nouri who had been diagnosed with autism and Attention Deficiency Hyperactivity Syndrome (ADHD), and realised that he had to take on that task himself.

“Nouri was diagnosed when he was a-year-and-a-half, but my parents and parents-in-law told us it was normal for some children to develop late. I was in denial for about a year or so but I also kept thinking we can’t just let him be, and do nothing,” recalled Fahkri, 41, a former manager at a think tank.

He was a hands-on father from the start. His wife was studying in a nursing college when Nouri was born six years ago, and so Fakhri took on the responsibilities of caring for his son.

“I took him with me everywhere, even to work. Luckily we had a flexible arrangement at work and I could have him with me in the office. My son and I are very close; we have bonded from spending so much time together,” said the father of three. He also has a two-year-old daughter and a four-month-old son.

It wasn’t easy taking care of Nouri. He has boundless energy, with an impulse to climb and scale walls. When he was younger, Nouri would sometimes go missing because he’d wander out on his own. Fakhri said they learnt to lock their doors and make Nouri wear a locket with his name and his parents’ contact number. Father’s mission: Mohd Fakhri Nor Affandi quit his job to set up a learning centre to help autistic children like his son Nouri. ‘My son is my KPI now,’ he said. – SIA HONG KIAU/The Star

“When we go for a function, we’d spend the entire evening chasing after him.

“We sent him to a learning centre but they told us they couldn’t handle him after two weeks. I clashed with them because they had assured us they could teach him when we enrolled him,” recounted Fakhri who took his case to a consumer’s tribunal court.

Fakhri won his case but it was a victory that left him even more depressed because the difficulties of finding help for his son had begun to sink in.

“I was in despair and my mind was all over the place. I kept thinking about what would happen to Nouri when I am no longer around.”

Fakhri visited various centres that offer help for special needs children. But he quickly realised that he couldn’t afford the fees at private centres, with rates ranging from RM100 to RM180 per hour for therapy and thousands of ringgit a month for early intervention programmes. At government facilities, therapy sessions were infrequent.

So, Fakhri began working closely with doctors at Selayang Hospital who were supportive when he mooted the idea of setting up an autism centre.

“It became clear to me that setting up a centre was the best option. I couldn’t keep working while giving Nouri the care that he needed. It just wasn’t viable and I was determined to help Nouri. So with that nekad (resolve), I quit my job.

“Fortunately, I have supportive friends. They rallied around me and helped me source for funding.”

Fakhri was introduced to Wan Saiful Wan Jan, chief executive of the think tank Institute for Democracy and Economic Affairs (IDEAS). He shared his dream of opening a centre for autism with Wan Saiful who agreed to support it. So Fakhri joined IDEAS as a project coordinator and set up IDEAS Autism Centre (IAC) in Taman Bukit Templer, Rawang in 2012.

“I learnt from scratch. When we were building the IDEAS centre in Rawang, I learnt about construction to make sure it was done right. The doctors and psychiatrists in Selayang Hospital gave us the modules and advised us on what to do,” shared Fakhri, a Jordanian Islamic studies graduate who also attends seminars and workshops on special needs whenever he can. 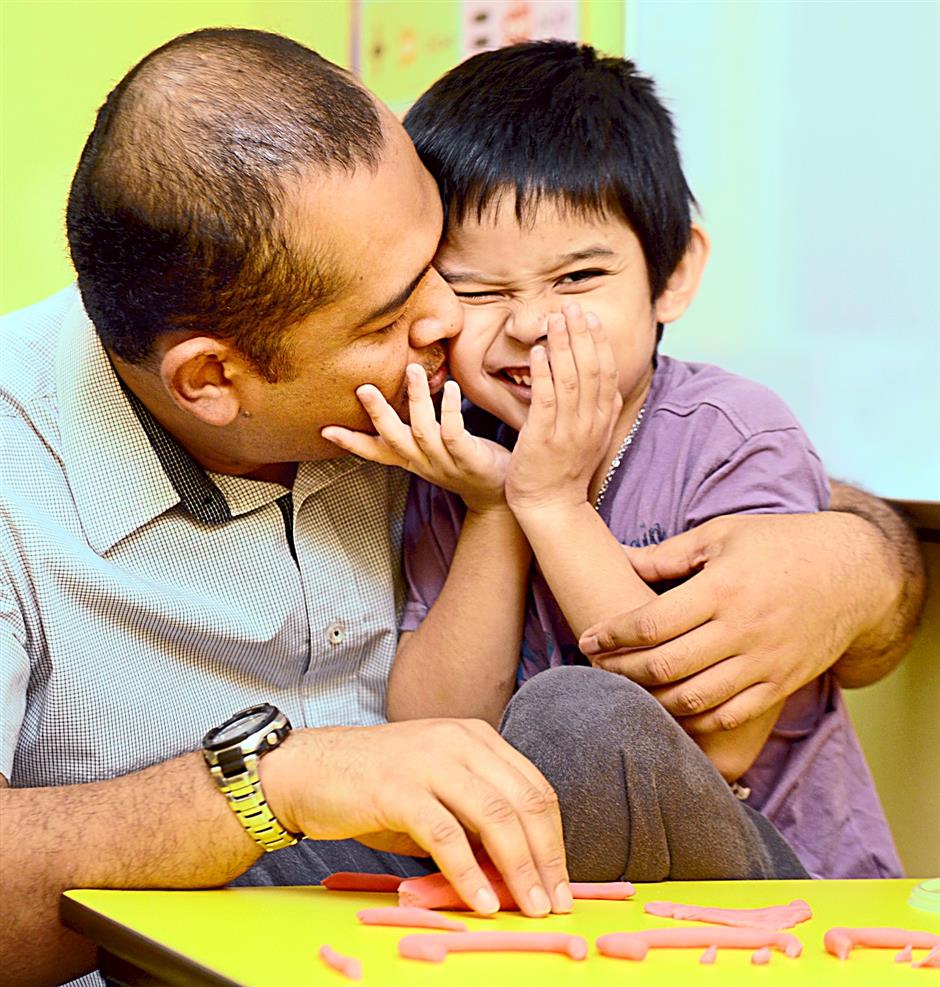 He also sought help from Universiti Kebangsaan Malaysia’s Autism Learning Lab and the National Autism Society of Malaysia (Nasom), as well as a child psychiatrist from Hospital Kuala Lumpur.

IAC started operating in October 2012, and now caters to 20 students with space for 10 more.

A year ago, Fakhri left IDEAS to set up his own non-profit learning centre in Selayang, Selangor, with funding from Letzhop (which brings in the Sesame Street English programme), Yayasan Taqwa Wilayah Persekutuan and friends. He runs early intervention programmes for autistic children, and now has 13 students including Nouri and daughter Louna, who has ADHD.

Fakhri started the centre with two special needs teachers in November last year, and now has four teachers. He is also in the midst of employing an occupational therapist for his centre. He also tries to continue raising funds for his centre so that he can offer more facilities and reduce his fees.

“It has been challenging. It’s also stressful but I am comfortable with this stress. This is what I want to do. I am a parent and I want to see results too. My son is my KPI now; if he is not making progress then something is not right with our module and we’ll adjust accordingly. We have also set up a support group for parents.

“All the children at the centre are my children. I meet up with the teachers regularly and we discuss how the children are doing,” said Fakhri who has plans to also start pre-vocational and vocational training, as well as hostel facilities for special needs adults in the future.

Fakhri believes this is what he was meant to do.

Nouri is learning to focus and follow instructions and is now taken with learning Jawi letters. At the centre, Nouri is of course more attentive with his teachers than with his father.

“He knows I let him get away with anything. His mother is the disciplinarian,” said Fakhri.

Every year, on his children’s birthdays, Fakhri will give them a birthday card. He’d write his wishes for them and tell them what their milestones were that year.

He remembers writing about Nouri’s diagnosis on his second birthday card. His son is now six, and Fakhri said his last few birthday cards have been all about his victories – developmental achievements and progresses, big and small.

To find out more about Mohd Fakhri Nor Affandi’s learning centre for children with autism, e-mail fakhri.fnd@gmail.com. To know more about IAC, visit ideas.org.my.

A better man for dealing with a child's disability