A child to call your own “Laila is my daughter through and through. I did the necessary to ensure the adoption process was done properly, and the birth mother can’t claim her back,” says Melissa.

She initially planned to adopt another child when Laila was older, but is worried it’ll bring up unwanted questions from her daughter.

“Perhaps I’ll just have Laila. And that’s enough,” she says.

Melissa has never thought of adopting an older child, because she says they come with emotional baggage.

Unfortunately, that’s how most people think too, and they opt for newborns or infants, preferring to start on a clean slate. Therefore, the older a child gets, the slimmer are his/her chances of being adopted.

“Every child needs a home. I want to urge more Malaysians to be open to adopting older kids. We try to place older kids who are in the orphanages run by the Social Welfare Department (JKM), but it’s very difficult,” says Orphancare’s Parents Committee coordinator Kim Rozali.

“We were set up with the main intention of placing orphans, and, subsequently, with the baby hatch to give desperate mothers a chance to give their babies up for adoption instead of abandoning them,” says Kim.

There are 2,600 couples registered with Orphancare, and they have placed 67 babies with families, including 13 from orphanages. The children are newborns to 13-year-olds.

Adoption can be a daunting process for couples. Apart from the procedures involved (see sidebar below on how to adopt), it is a big decision to welcome a child into your family.

Potential adoptive parents are reviewed by Orphancare staff for suitability. They answer a questionnaire, to assess how the rest of their family feel about the adoption, the environment that the child will be brought up in, the couple’s ability to provide for the child, the psychological and personality makeup of the couple, childcare and parenting experience, and so on.

If a baby is available for adoption, it could take just two weeks to finalise the fostering process. There are many parents out there who want a child, says Kim. She is saddened by recent news of baby dumpings and deaths, urging the public to be aware that they can bring the baby to the hatch instead of resorting to desperate measures.

“We also have young unwed mothers walking into the centre and handing their babies over to us.

“The majority of our babies are Malay. So far, we’ve also had five Filipino babies, about 10 Indonesian babies, five South African babies, and on the rare occasion, a Chinese and an Indian baby,” she says.

In Malaysia, a Muslim baby can only be adopted by Muslim parents.

Although there are proper procedures in place for adoption in this country, most people seem unaware, or perhaps unwilling to go through the right channels.

Datin Elya Lim Adnan, who is the Orphancare government relations coordinator, says that adopting children is a practice that has been in our society for a long time.

“The steps are there. The information is clearly stated in JKM’s website,” she says.

But there will be people who opt to bypass the bureaucracies. They seek out “agents” who know where to procure babies for them for a fee. Syndicates that sell babies were recently in the news, and the couples who used their services had their babies taken away from them.

Some couples also adopt babies informally from their extended families, or within their communities.

Kim implores Malaysians to do it by the book.

“When you go through dubious channels, you never know what lies ahead. What if the birth certificate was forged? When it comes time to do identification cards and passports, you will run into trouble,” she says.

Moving forward, Kim and Elya hope to match more parents with children who need loving homes. They continue to advocate the adoption and fostering of older orphans.

Most people think only of adoption, but fostering is also another option they can explore. With fostering, they can provide stability and love for children instead of letting them languish in orphanages and children’s homes. It’s about giving a home for a child who needs one.

For more information on adopting, visit www.orphancare.org.my or www.jkm.gov.my. Orphancare is located at 6, Lorong SS1/24A, Kampung Tunku, Petaling Jaya, Selangor. It can be reached at (03) 7876-1900. 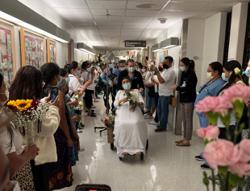