Using electricity as fuel for transport is possible for public transportation.

Unknown to many, an electric bus had been used in trial runs plying RapidKL routes in the Klang Valley for six months. The trial, which started last September, ended in February.

“The electric bus is similar to the 2,000 buses that have been in use in China since 2010,” said Malaysian Green Technology Corporation (GreenTech Malaysia) chief executive officer Ahmad Hadri Haris.

The non-profit organisation under the purview of the Energy, Green Technology and Water Ministry (KeTTHA) was tasked to facilitate green technology deployment in the country with full fledge commercial models instead of prototype electric vehicles (EV).

“This reduces anxiety and speeds up public adoption. The trial was to see how the bus could be operated and adapted to the local climate and traffic patterns, with the exception of the charging mechanism,” he said. 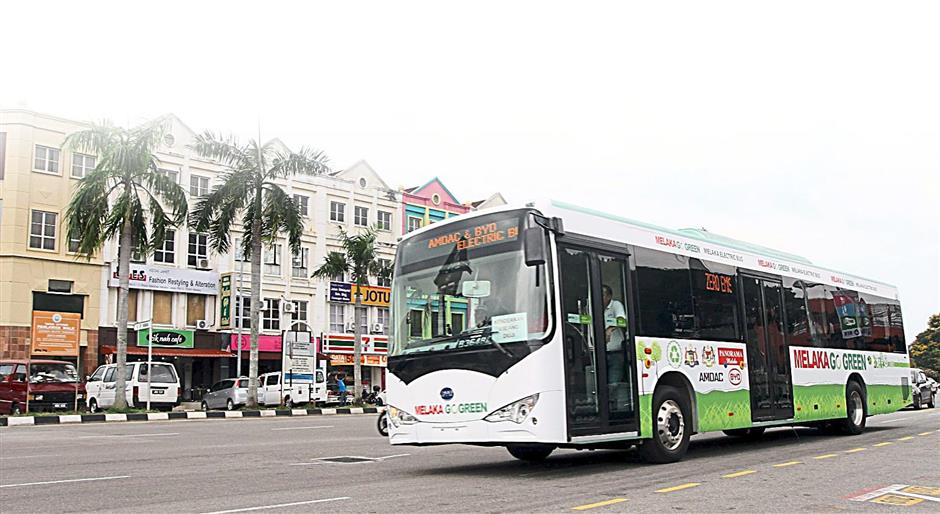 The electric bus that plies historical sites in Malacca.

The electric bus can run between 250km and 300km or six hours on a full charge.

Imported by Amdac (M) Sdn Bhd in partnership with China’s BYD Auto, Ahmad Hadri said this is one example of a private initiative to encourage EV penetration in the country.

Costing between RM1.2mil and RM1.5mil each, depending on specification, the buses are almost double the price of an advanced diesel bus.

During the trial, sand bags were used to simulate the weight of a realistic passenger load.

Having travelled over 15,000km by the end of the trial without breakdown or an oil change, he said the bus required minimal maintenance. All it needs is an electric charger at the bus depot.

“The operator is happy with it. They are expected to lease five of these buses by the end of this year from Amdac, and another 15 next year.

He said RapidBus will also lease some buses for their Bus Rapid Transit (BRT) Bandar Sunway service which would be implemented next year.

He said the future of the electric buses in the country would depend on how these vehicles fair in use with Sunway BRT and Malacca. 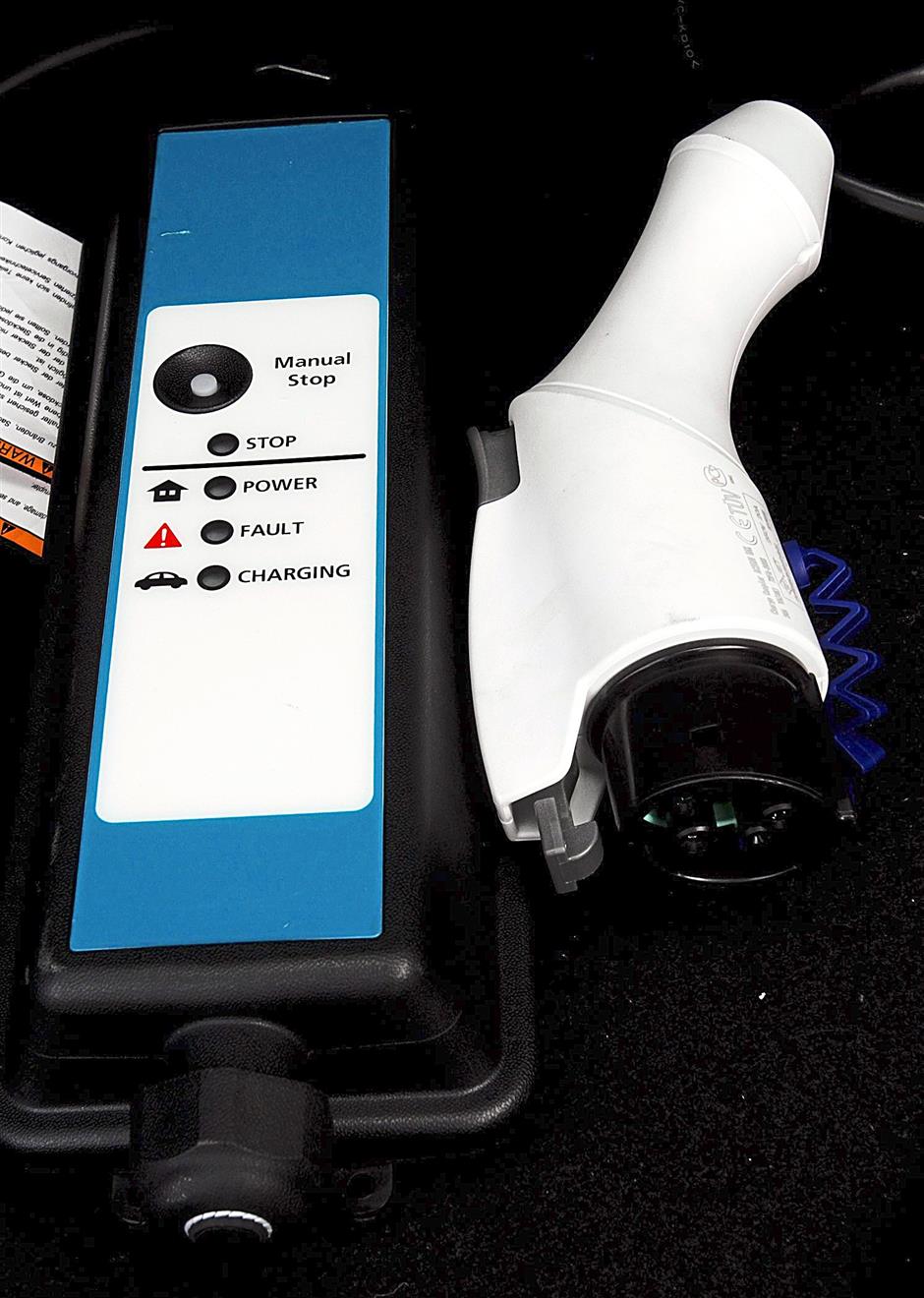 The electric cars come with a handy charger that weighs less than a kilo. The charger can be hooked up to any power source to charge the vehicle batteries.

The government is also setting a policy to encourage the use of EVs in Malaysia.

Through the scheme, bus operators would be able to secure loans from SME Bank at 4% interest rate for up to 10 years repayment to buy these buses.

GreenTech will also introducing electric passenger cars within the next two months.

Under the Cohesive Mobility Solution (Comos), a partnership between GreenTech Malaysia, CMS Consortium Sdn Bhd and the Malaysia Automotive Institute, the public can rent the car from their smartphones and collect the vehicle at designated charging stations.

The cost of renting the cars is expected to be RM15 an hour.

Ahmad Hadri said, for a start 30 five-seater Renault Zoe vehicles with a range of 200km, would be introduced in the Klang Valley.

However, he said, their biggest challenge now is to find a location than can be turned it into a station to park and charge the cars. 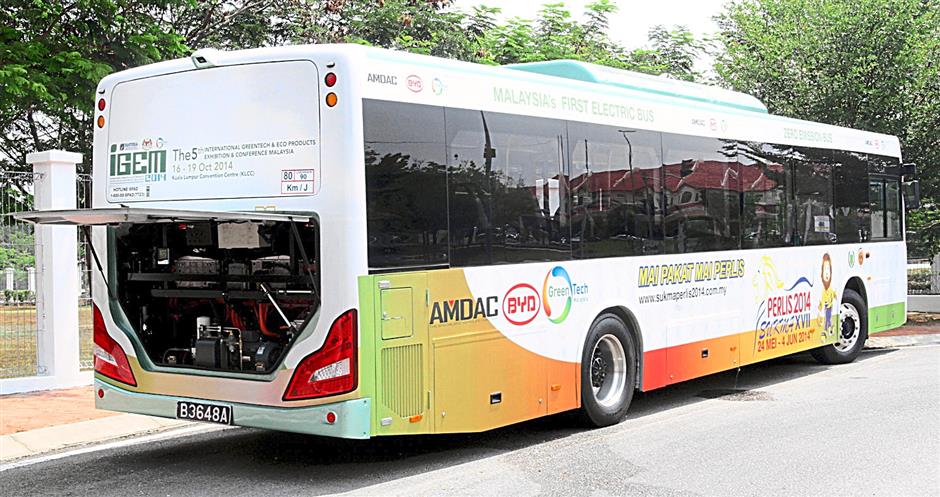 Like normal bus, the soon- to- be- introduced electric bus has 25 seats and one wheelchair bay.

He said they prefer to have their facilities located nearer to the LRT stations.

“We are also keen to extend the services to high-traffic areas such as shopping malls.”

He said they are finding it difficult to work with building owners who are not keen to support the project.

A similar scheme will also be introduced in Langkawi, where two-seat Renault Twizzy vehicles will be used, he said.

“To encourage the move, a tax deduction would be given to companies that participated in the programme.”

However, because EVs accounted for less than 1% of vehicles sold last year, he does not think this will be realistic.

“Only if 20,000 EVs are sold will we see or anticipate car manufacturers entering the market,” he said.

Perhaps tax incentives for EV could encourage people to own the vehicles. The small and sleek Renault Twizzy that would be introduced in Langkawi.

He said the effect could be seen when the Government introduced special incentives for hybrid cars.

According to some studies, EVs consume 73% less energy than ordinary cars and their use could lead to a 21% reduction in CO² emissions.

“We all want to be a developed nation, but not at the expense of the environment,” he concluded.