Logos on the go

Nike's distinctive Volkswagen camper van known as the Running Wagon. The company's logo is one of the most recognisable in the world.

Nike’s journey to becoming one of the world’s largest makers of athletic footwear and apparel was greatly helped by its instantly recognisable “Swoosh” logo.

The logo represents the wing of the Greek goddess of victory, which the company is named after.

Carolyn Davidson created the logo in 1971 while she was a graphic design student at Portland State University in Oregon,. She was paid US$35 for the logo.

Using a simple logo, a great slogan and a list of superstars to promote the brand, Nike has become a New York Stock Exchange listed behemoth that reported revenue of US$25bil (RM82bil) last year. Khaw and Jasmine showing some of the company's logos in the Logolounge reference books for designers.


Start-ups may or may not eventually grow big beyond the wildest dreams of their founders, but their logo will remain the recognised “face”, regardless of size and age.

In Malaysia, Jasmine Hor founded Gizwiz Studio Sdn Bhd with the vision of being the “go to choice” for start-up businesses worldwide who are in need of branding services.

Initially working from home with the Internet, Hor, who is now the creative director of Gizwiz, founded the company in 2003 with her husband Khaw Chin Siong. Khaw. He is the technical director of the company.

The husband and wife team foresaw that many businesses would spring up — thanks to the Internet — and created a website, LogoDesignCreation.com, to cater to startups. Khaw developed the site and user interface to manage customer requests.

“Our main idea was a no-frills approach to ensure customers would not experience the complexities of getting design work done for their businesses,” she tells Metrobiz.

Having done research on the US market, she says she realised the potential there was huge and held a great deal of demand from start-ups seeking affordable logo designs.

It was also an advantage that a large proportion of the US population was already connected to the Internet and comfortable with e-commerce.

Hor, who is a graphic designer by training, says she was frustrated in the early days of her career because clients couldn’t seem to understand the intricacies of design work. Also, the design industry in Malaysia was very challenging.

She says many local customers were not able to accept designers as professional talent.

“Customers in Asia are more demanding, indecisive and do not adapt well to new creative concepts. Americans on the other hand respect the design choices of professionals and are satisfied with, at most, only one design revision,” she says.

GizWiz, which is short for Gizmo Wizard, got their first order from a US-based start-up.

Since then, they have steadily recognised as a go-to designer among start-ups in industries as varied as education, medicine, entertainment and food and beverages around the world.

The company has 69 of its logos selected by judges from LogoLounge, a well known website that provides reference material for logo designers. LogoLounge also publishes a yearly reference book on logos. 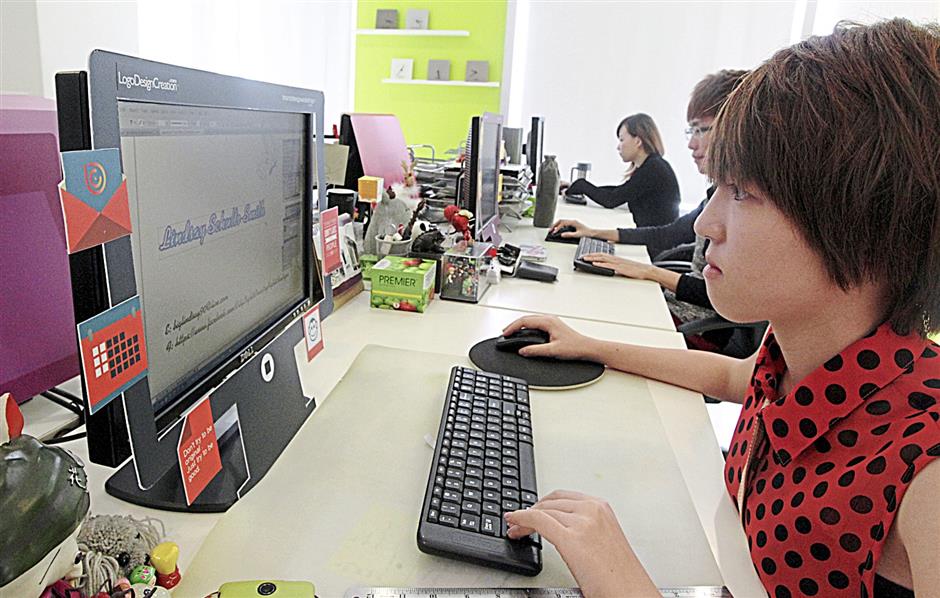 
Each year, some 35,000 logos are submitted by LogoLounge members for the judges to pick the best logos for the reference book.

GizWiz has also been written by publications such as The Wall Street Journal and Wired magazine.

“We don’t do any major publicity push, but we were contacted by the journalists who knows our work. We are proud to be the only Malaysian online logo design service provider to compete with other logo creators in US,” she says.

Having served over 5,000 start-ups worldwide since its started, Hor says the company’s foreign customers are comfortable paying upfront for logo development, unlike the local situation where customers only pay after they accept a design.

“Our vision is to provide every start-up with a unique and professionally designed logo at a fraction of the cost,” she says, adding that all the company’s designs come with a 100% moneyback guarantee, which gives the customers comfort.

Hor says, currently, the company gets about 10 orders a day. Prices range from US$89 to US$249, depending on the amount of design work required.

After receiving a work request, they normally produce three concepts for the client to view within one to two days. Requests for designs come via the website, which is also as a tool for their graphic designers to manage deadlines.

“Customers can request changes, which we make within a day or two, but usually everything is finalised with less than three changes,” she says.

Most of the changes involve font type and colour. However in some instances, it involves new work and introduction of new design elements.

Almost 80% the company’s customers coming from the US while another 20% are from Asia, Australia and Europe,.

She says 25% of customers return for creative work on things like brochures, website design and t-shirts. Those services can cost up to US$3,000.

Recalling the early days when she approached investors for funds to set up the business, she says it was difficult as most investors were more interested in mobile applications and tangible products, rather than design services.

“We were discouraged by some potential investors who wanted us to create software-based automated design systems that used recyclable designs to be sold online.

“There is still a lack of understanding in Malaysia about how design really works. Unique designs are important because it helps make new businesses more visible and credible, two key factors in future growth and success,” she says, adding that delivering a software-based automated design creator with recycled images would not bring any value to businesses that used it.

“Our customers are very important and we are very focused on delivering great designs to help their businesses.

“Recycled images will never make their brand standout in the market,” she says.

Hor says, although there are no concrete statistics of how many start-ups or new businesses are established around the world each year, based on what she can see, they estimated at least a millions, with thousands being created on daily basis.

In this highly competitive landscape, she says it is crucial for start-ups to stand out from the crowd.

“However, building a brand is a long-term investment and most start-ups don’t have the financial resources to do this.

“As such, in the early stages of a business, a strong and recognisable logo allows start-ups to obtain visibility and credibility. A logo provides start-ups with a strong foundation to introduce their products and services to their target market and quickly differentiate themselves from their competitors,” she says.

Having invested about RM100,000 in the company to date, the early experience of pitching to investors leads her to believe that there is a need to build awareness among Malaysians about the importance of design and the value it brings.

She says GizWiz is now working on another Internet-based initiative, BrandDesignWorkShop.com, that will help retain local design talent and prepare Malaysia to compete among other Asian countries where design and creativity are more valued.

She said they are looking for RM1mil fund to expend the business. They planned to use the fund to marketing, recruit designers and having a bigger premise.

The company also planned to recruit freelances to help them further penetrate the market.

She said they aim to enlist 1.000 Asian designers to join them by year end as they anticipated of getting between 100 and 300 orders from their website by 2015.