Is the property sector really down?

Damansara Heights proximity to the city of Kuala Lumpur, and its many bungalows set among much greenery, has made it one of the Kuala Lumpurs most prestigious address.

THE situation in the current property market can almost be likened to a “perfect storm” – an expression that describes a drastic situation that is caused by a combination of (often rare) circumstances.

Cooling measures that were previously introduced, the uncertainty of the goods and services tax this year, the plunging ringgit, a shaky political situation and an oversupply of units within some property sub-segments have all but rattled buyers and investors alike.

Within the secondary property market, rental rates have been rather subdued this year as well.

According to PPC International CEO (Agency) Siva Shanker, the high-rise (especially luxury condominium) segment, in particular, has been taking quite a beating - largely due to the oversupply of properties within this particular sub-sector.

“The high-end condo segment has lost a lot of value since the 2008 global financial crisis. Many expatriates left the country and rents never quite recovered, with some sectors seeing as much as a 30% drop in rents,” he says.

Siva explains that immediately following the global financial crisis, there was a spike in demand for high-rise, high-end properties - mainly by speculators.

These were buyers from investment clubs, those influenced by supposed “property gurus” and speculators with limited holding power, particularly those who bought properties under the Developer Interest Bearing Schemes (DIBS), Siva says. 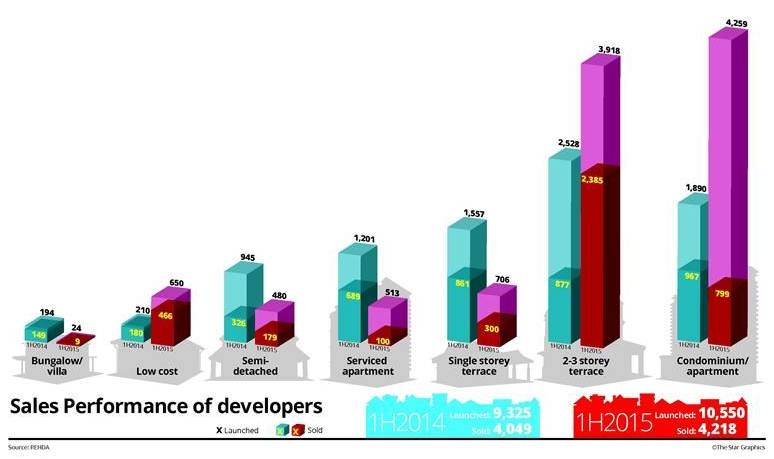 “A lot of people would have bought these upcoming properties to flip (sell at a higher price). But at such prices, they may have problems finding a buyer.”

Due to this situation, and seeing as many of these preliminary buyers having to finally start servicing their mortgage (now that the properties are up and ready), many will do the next viable thing - rent out the units.

“Again, to try and get the most out of the situation, they will want to rent out the property at the highest possible price.

“But because there’s an oversupply situation, there will be competition from other owners. So, a price war will begin as they start lowering prices (to be able to secure a tenant).”

Siva says rents of high-end condos could drop a further 20% to 30% within the next 12 months.

According to Savills Malaysia in a report, the secondary market of the luxury condo sector in KLCC, Bangsar and Mont Kiara continued to see increases in values in 2014.

On the outlook for the market this year, Savills says the subdued overall property market sentiment in 2014 is expected to extend into the second half of 2015.

Landed residential properties, meanwhile, are less likely to be affected as much, if at all, Siva says.

“For landed properties, the supply is quite limited, so I don’t see any problems when it comes to rents.”

CH Williams Talhar & Wong’s (WTW) managing director Foo Gee Jen says that with so many developments within the residential sector, individuals are spoilt for choice.

“Because of this, rents are not going up and in some areas, yields are compressed.”

Foo says rental yields for the residential market currently stands at between 2.5% and 4.5%.

“We believe rental rates will remain flat for the remainder of the year,” he says.

SK Brothers Realty Sdn Bhd general manager Chan Ai Cheng, meanwhile, says that while rental rates for residential properties this year have reduced, the market, however, has been strong.

“There has been a lot of adjustment in rentals. People were more willing to maintain or reduce rents rather than increase prices and live with an empty unit with no tenants.

“Rental rates, especially within Petaling Jaya, have not dropped by much this year. But there has been a lot of adjustment,” she says.

As for the office sub-sector, Savills Malaysia deputy managing director Paul Khong says rentals have been relatively flat this year.

“The office market has become rather quiet due to the contraction in the oil and gas sector, which was one of the main segments mopping up available office space in the city centre in the last few years.”

Khong says areas such as KL Sentral, Mid Valley and Bangsar South are some of the examples of office locations that have done well - with either high occupancy rates or large amounts of space being taken up within the last 12 to 18 months.

“There is a lot of space available within the Kuala Lumpur city centre and some of the big multinational companies (MNCs) are now giving up excess space in the sub-lease market.”

With the recent drop in the value of the ringgit, Khong says rental rates in Kuala Lumpur will look attractive. Moving forward, he believes that rents in Malaysia will be one of the lowest in the region.

“On this reverse view point, it may seem attractive for foreign firms or MNC’s to relocate to Malaysia as a cost-saving move, but they would now have to carefully consider the stability factor in their relocation matrix.

“There is a compression in rents in the market, as actual costs of service charges are moving upwards whilst the gross rental rates have remained stable. The market is expected to be slow and to move sideways even though replacements or building costs are expected to be on the rise.”

Khong says that with a lot of new buildings in the pipeline, especially with higher specifications, more landlords are now giving attractive, rent-free packages and providing fit-out contributions to entice tenants to move over.

“Subsequently, the bigger challenge will be for older buildings to retain their existing tenants from moving away.”

“The planned office space for the Klang Valley is substantial and for the next three years, we are looking at about 17 million sq ft. We expect a challenging period in the current market conditions today.”

According to Savills Malaysia’s latest Asian Cities report, office space within Greater KL stood at 96.6 million sq ft as at last year - a 2.9% increase from 2013.

Three office buildings were completed in KL during the second half of 2014, namely, Menara Hap Seng 2, Menara MBMR and Sunway Velocity V Office.

These three buildings represent about 720,000 sq ft of additional office space. In total, about 2.9 million sq ft of office space was completed in Greater KL in 2014, which is less significant than in 2013, which saw a completion of 5.1 million sq ft, with a substantial portion of that new supply located in KL Sentral.

Gross passing rents did not see any significant increase between the first and second halves of 2014, averaging RM7.79 per sq ft per month against RM7.76 per sq ft six months earlier.

In the last six months of 2014, it said there were 12 noteworthy transactions totalling RM5.3bil worth of property. The majority of the transactions were for industrial plots located in Shah Alam, Kota Damansara and Semenyih.