is upbeat that its newly launched integrated waterfront development in Puteri Harbour will attract strong interest from local and foreign buyers.

Its managing director Lim Soon Huat said that despite negative news reports on Iskandar Malaysia’s property market outlook due to possible property glut, the company was confident that its project would do well. He said the location of the project overlooking Singapore would be its strong selling point as waterfront properties were rare and highly valued by property buyers.

“Puteri Harbour is the jewel of Nusajaya and the ongoing projects by several other developers within the vicinity are testimony that they too are optimistic of the prospects here,’’ Lim said on Saturday.

The two tower blocks – the 33-storey and the 35-storey blocks comprise 456 units of condominiums with five different floor plans, ranging from 769 sq ft to 2,262 sq ft at prices starting from RM880 per sq ft.

The waterfront development on a 5.05ha site also comprises of a 38-storey tower block of Seafront Residences, a 34-storey block of office and suites and 200,000 sq ft of waterfront retail space, expected to be completed by 2019.

The entire project with a gross development value of RM1.5bil is a joint-venture between Khazanah Nasional Bhd which has 30% equity and PPB Group and Kuok Brothers holding 70% stakes.

“We’ve already sold 50% of the 456 condominiums units for the phase one with 80% of the buyers are Malaysians and 20% are Singaporeans, mainland Chinese and buyers from Hong Kong,’’ said Lim.

He said that works on the two condominium tower blocks already started and expected to be completed by 2018, and phase two and phase three would start by the end of 2016.

Lim said that another strong selling point of the project was its close proximity to the Customs, Immigration and Quarantine and Puteri Harbour Ferry Terminal and just minutes away from the Second Link Crossing in Gelang Patah to Singapore.

“Right now there are already ferry services from Puteri Harbour to Batam Island and and Karimun Island in Indonesia and soon there will be services from here to Harbour Waterfront Terminal in Singapore,’’ he said. Lim said the company would also be targeting wealthy Indonesians from the two islands as rich Indonesians would normally own properties outside of their country. 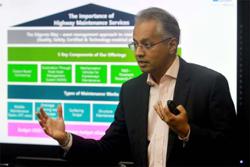