The transporting landscape is quietly transforming

The transporting landscape is quietly transforming

THE supposedly boring landscape of logistics has been quietly transforming.

For the longest time, logistics was seen as something old – think lorry trucks, low wages, intensity of labour, and the loading and unloading of goods. Logistics today is about supply chain management, adapting to fickle customer needs and a compulsory wide distribution network.

If done properly, the business of transporting can translate into substantial earnings with growth every year.

New consumer habits and technological advancement have changed the dynamics of what was once considered a brick-and-mortar business - phasing out those that stay stuck in a rut, while rewarding those that diversify and adapt to supply chain management.

The lesson of not adapting is clear. Tamadam Bonded Warehouse Bhd, which back in the day concentrated solely on bonded warehousing, eventually became loss-making. Its losses forced the company to diversify into the food and beverage (F&B) business, and in 2007, F&B company Brahim’s Holdings Bhd took over its listing status via a reverse takeover. Tamadam’s name was changed to Brahim’s Holdings in 2011 and it has been fully in the F&B and inflight catering business since then.

The point is, players who adjust to market requirements are starting to record not-so-boring earnings.

This is especially so when only 10% of manufacturers in Malaysia currently outsource their logistics operations to dedicated logistics solutions providers.

Today, the successful players are those that provide three things - logistics as a service, supply chain on demand and being the provider of a logistics marketplace.

and Freight Management Holdings Bhd has picked up recently.

Backed by reputable owners, these companies have more or less been recording steady growth in their earnings throughout the years.

Despite the rise in their share price over the last few weeks, most of these stocks are still trading at single-digit price earnings (PE) ratios. The stable earnings have enabled them to consistently pay out dividends.

Since the entry of SingPost, GDEx’s valuations have skyrocketed, and the stock is now trading at a PE of over 80 times.

With Malaysian buyers said to be among the highest online shoppers in the region, and coupled with its regional growth prospects, investor interest in GDEx remains strong.

“We have been able to consistently scale up our operations without affecting service standards. This enables us to continue to deliver on market expectations. Our business model is very much solutions-based, and thus, this satisfies many customers’ expectations,” said GDEx group chief executive officer Teong Teck Lean. Teong: ‘We have been able to scale up operations without affecting our service standards’.

“To survive in today’s logistics industry, you need to be multimodal and a market leader in at least one of the segments you operate in,” he says.

Tiong Nam, for example, is the leader in the warehousing segment. It owns over 60 warehouses in the region, with a combined storage capacity of over 3.5 million square feet.

It has massively diversified into property development and construction, and is turning to become a compelling asset play, especially with 166 acres of vacant land in Johor Baru, Kuala Lumpur and Shah Alam. In 2014, a third of its revenue was contributed by property.

As for Century Logistics, it is the leader in the oil and gas (O&G) logistics and procurement logistics segment.

Following the original equipment manufacturer model, Teow says the company procures components from China and South Korea, assembles and brands the products for its customers before distributing them.

“Procurement logistics has transformed the business from a sunset business to a sunrise business,” he says.

Tasco, on the other hand, has Japan-listed Nippon Yusen Kabushiki Kaisha as its main shareholder and has an edge in securing Japanese clients.

“We have an added advantage - a huge and captive customer base. So, when we diversify and embark on a new business, for example, we can leverage on our existing customer base,” says Century Logistics’ Teow. 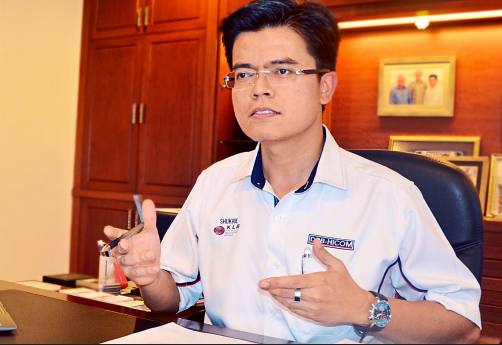 Shukrie: ‘The group’s vision, through acquisitions, is to be the leading integrated logistics solution provider’.

Meanwhile, Tiong Nam’s group executive director Victor Ong says that Tiong Nam is able to ride out the current economic slowdown as it leverages on its strong network while adapting to changing trends.

For example, in 2010, Tiong Nam made a decision to become asset-light and adopted a sale and leaseback model for its trucking services. It currently owns only 10% of the 1,900 trucks utilised. With this, it has brought down fuel and maintenance costs. Fuel currently makes up 5% to 30% of costs. This has enabled it to survive despite the high capital expenditure typically needed in the business.

The other trend which is clearly emerging in logistics is cloud-based information technology storage.

“Warehousing isn’t simply for physically heavy goods. Data is the new fuel of the logistics industry,” says one fund manager.

Logistics companies are moving in that direction, and Century Logistics is a clear example.

Logistics is not limited to just what happens on the roads and air in Malaysia.

The rise in Westports Holdings Bhd

’s throughput is another indication of more volumes for the logistics players.

Westports is one of two terminals alongside Northport located in Port Klang, and is the world’s 12th largest port by volume. Teow: ‘You need to be multimodal  and a market leader.

Its full-year operational revenue came in 11% higher at RM1.5bil compared to RM1.3bil a year earlier, due mainly to the 12% increase in container throughput to 8.4 million twenty-foot equivalent units.

The port operator estimates a 5% to 10% increase in volume for this year.

Clearly, the logistics sector is one that is set to grow and has been attracting a fair bit of investments. One group that has been quietly growing its slew of services is DRB-Hicom Bhd

. Through an acqusitive strategy, it now has air, land and sea logistics solutions. Its head of logistics, Datuk Shukrie Salleh, says that Malaysia’s logistics industry’s turnover for 2013 was a whopping RM120bil and that this is projected to grow to RM200bil by 2020, noting that this is the opportunity that DRB-Hicom

is hoping to tap. And that’s just another indication why this industry can no longer be deemed a sleepy one.

Earlier this year, the Employees Provident Fund (EPF) made its maiden foray into Japan’s real estate market after paying more than RM420mil for several logistics assets there.

“Yields on the properties are expected to come to 10%, higher than the average for privately placed real estate investment trusts,” the portal said.

It added that the EPF planned to buy similar properties in the Tokyo area and major regional cities, building its portfolio to around 50 billion yen within two years.

In February, the pension fund tied up with Australia’s Goodman Group to form a 50:50 joint venture to develop RM1.4bil worth of logistics assets in Malaysia and the region for the next three years.

Third-party logistics continues to be the company’s bread and butter, accounting for around 72% of revenue and 52% of operating profit for 2014.

Under this segment, the company handles everything from the procurement of raw materials to port and Customs clearance, international freight forwarding, inventory management and distribution.

Under the O&G segment, it provides ship-to-ship transfer for both fuel and crude oil and services around 50 vessels a month off the Port of Tanjung Pelepas, Johor, via three operating floating storage units.

It currently has a combined total of about one million square feet of warehouse space spread out among its facilities in Gelang Patah, Johor, and in Port Klang.

It rents out some of its facilities to multinational logistics companies, for example, Germany’s DHL Express and Switzerland’s Panalpina, which are two of the world’s leading providers of supply chain solutions.

DHL Express and Panalpina are each renting a facility on Century Logistics’ Plot D28 in Gelang Patah, Johor, and thus serves as regional distribution centres for the companies.

Last November, Century Logistics announced a proposed acquisition of two parcels of adjoining vacant industrial land for around RM38mil for its multi-storey warehouse, which will be paid from its current cash balance.