Is the Public Accounts Committee equipped to assess the work of Ambrin who has been tasked with verifying the books of 1MDB from 2009?

FORENSIC auditing has never been so widely discussed as in the last two weeks. And neither has the Auditor-General Tan Sri Ambrin Buang (pic) received so much attention.

It started when Prime Minister Datuk Seri Najib Tun Razak instructed Ambrin to “independently verify 1Malaysia Development Bhd’s (1MDB) accounts during a Cabinet meeting on March 4. Politicians from both sides of the political divide as well as observers propagated that the Auditor-General should undertake a forensic audit of 1MDB’s books to get to the bottom of its business transactions and find out why the six-year government fund is facing cashflow problems.

In addition, there has been a slew of reports of 1MDB’s transactions involving various parties outside the ambit of its joint venture with Petrosaudi International, a deal that was signed in 2009.

Deputy Prime Minister Tan Sri Muhyiddin Yassin has issued a strong statement urging the Auditor-General to undertake a forensic audit of 1MDB’s books to ensure no financial irregularities in the various transactions. 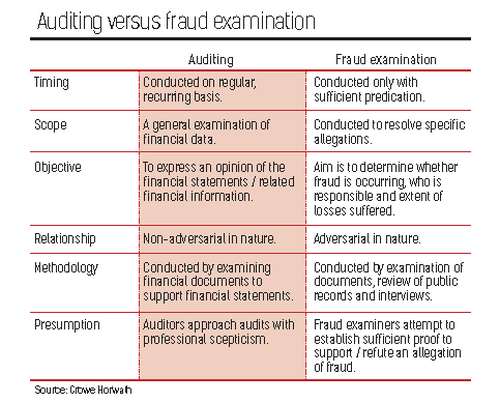 In a statement just two days after Ambrin got his instructions, Muhyiddin made it quite clear that he would like to see the Auditor-General conduct a transparent, independent and comprehensive audit of 1MDB from its inception in 2009.

Although Deloitte, the external auditors of 1MDB had briefed the Cabinet of the fund’s books, the deputy prime minister made it clear that the accounting firm was only responsible for the accounts after 2013 and all earlier transactions were not within its purview.

Muhyiddin’s call for a forensic audit going back to 2009 largely relates to allegations of questionable transactions related to 1MDB that was approved by the management then and the board.

“Yes, the BMF scandal could be deemed one of the largest. As in most financial scandals, cross-border transactions are a common feature, the aim of which is to diminish the audit trail,” says Ferrier Hodgson MH director of forensic and investigation Liew Kim Yuen.

But the probe into the BMF was a Royal Commission of Inquiry which had extensive powers to call just about anyone.

The reports that came out of it were in several volumes of up to 1.2m high. It had details on how loans were approved by Bank Bumiputra without proper due diligence and risk management was thrown out the window. 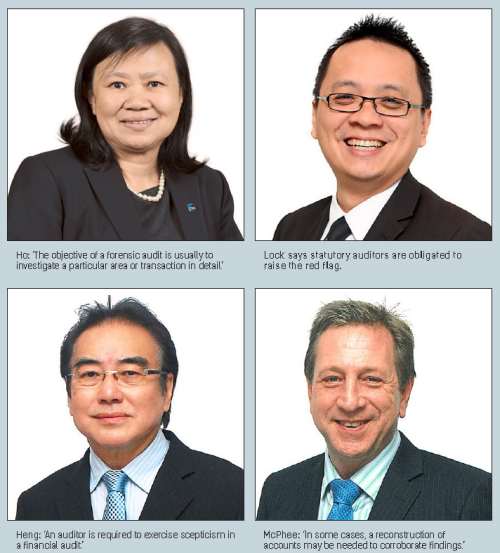 An accountant says that the scope of Ambrin’s job, whether it will be a forensic audit or otherwise, will depend on his terms of reference. Ambrin says that his terms of reference have not been set and this is something that will likely be ironed out when he meets the Public Accounts Committee (PAC) that is led by Datuk Nur Jazlan with Dr Tan Seng Giaw from the DAP as the deputy.

Unlike audit firms such as the “big four”, which are governed by the Audit Oversight Board (AOB), which in turn comes under the purview of the Securities Commission, the Auditor-General generally reports to the Parliament.

The AOB’s role essentially covers questions on the quality and reliability of audited financial statements of public-listed companies and financial intermediaries such as banks and brokerages. So examining the quality of audit done on 1MDB’s accounts is out of its purview.

As for the Auditor-General, the office generally engages private firms to undertake the financial audit of large companies and they comment on the management of the accounts, if there are shortcomings. The report is then tabled in Parliament. The Auditor-General has not undertaken a forensic audit until now.

Hence, this raises the question as to whether the Auditor-General is equipped to undertake the job of conducting a thorough probe into the books and transactions of 1MDB going back to 2009. Also, is the PAC, which will scrutinise the findings, competent to assess the quality of the work done by the Auditor-General?

The demand for a thorough investigation into the books of 1MDB, be it forensic accounting, investigative audit or probe, is humongous, according to accountants. They say that there are big differences between a financial statements audit or what is termed as a statutory audit, and forensic audit, with the latter attempting to either “clear the air” or “air dirty laundry in public” on the party in question.

“It (a forensic audit) is a full-scale investigation to determine how the fraud was committed or orchestrated,” says Baker Tilly Monteiro Heng and Ferrier Hodgson MH executive chairman Datuk Heng Ji Keng.

James Chan, a partner at Crowe Horwath, says the primary purpose of a fraud examiner or a forensic audit is to establish sufficient proof to either support or refute a fraud allegation.

“His (the forensic auditor’s) report will be used by a lawyer in a civil case, criminal case under the Penal Code, Anti-Money Laundering Act and Companies Commision of Malaysia. The external auditor may use it to establish the impact on his opinion in respect of the financial statement. As for the board of directors, it will use it as part of corporate governance,” says Chan.

While Chan’s experience involves cross-border transactions from China, Indonesia and Pakistan, all are with public-listed companies.

“In a nutshell, they are the audit works guided by the approved standards on auditing in Malaysia and it is important to note that an audit does not give the absolute assurance that the financials are free from material misstatement. But the intention is to provide reasonable or limited assurance with the eventual opinion solely on the financial information,” says Baker Tilly partner Lock Peng Kuan.

However, statutory auditors are obligated to raise the red flag and report fraud-related matters to the relevant authorities as entrusted under CMSA 2007 and Companies Act 1965, according to Lock.

Heng adds: “Whilst it is not the duty of the auditor in a financial audit to uncover fraud, the auditor is required to exercise scepticism. The test, however, is much lower than a forensic audit, where fraud is already suspected.”

Chan says that the features of forensic or fraud examination are typically non-recurring and conducted to resolve specific allegations.

In a forensic audit, the auditor will ideally get documented evidence to support the report. “Generally, his report should try to answer all the who, what, when, why, where and how of the fraud transaction. Modus operandi if possible,” Chan says.

Ferrier Hodgson MH director of forensic and investigation Patrick McPhee says whether the books will need to be reconstructed in a forensic audit will depend on what transpired and the matter of investigation.

“In some cases, a reconstruction of accounts may be needed to corroborate findings. However, in most forensic investigations, the work generally focuses on establishing a trail of irrefutable evidence to determine what actually took place,” he says.

Ho says that reconstruction of the books or the financial statements, if needed, is usually a challenging task especially if the financial records are incomplete.

A forensic audit time frame is dependent on the quantity of fraud transactions (investigated on) as well as the availability of documents. Chan says: “In one of our cases it took six months, involving 16 volumes of fraud reports. Prior to our appointment, two containers of documents were burnt.”

However, Liew adds that it is more about the capability and expertise of the forensic accountants rather than the number of manpower to undertake the works.

He explains that in a financial audit, there are set industry hours as benchmark to complete certain audit procedures.

In a forensic audit, it’s the involvement of the experts in the analysis and understanding of the underlying transactions in order to form a judgement based on the circumstantial evidence on the legitimacy of such business arrangements or transactions.

“The international reach of the forensic expert is important especially for cross-border transactions as it involves the deployment and coordination with various experts in different jurisdictions,” Liew says.

A forensic accountant must be equipped with the necessary skills, experience and resources to undertake an analysis of the information and to produce the evidence required as litigation support at court.

“For a forensics or fraud investigation assignment, the forensic accountant must be able to objectively quantify the extent and duration of the fraud, identify the parties involved, collate the evidence using the software and techniques, having regard to the rules of evidence and admissibility, trace misappropriated funds or assets and effectively report the results to stakeholders,” says Baker Tilly’s Lock.

The engagement of forensic IT, which involves the application of specialist computer techniques to obtain evidence from computers and to recover data may also be needed to conduct a forensic audit.

At the end of the day, the Auditor-General’s task at unravelling 1MDB’s books is not an easy one. Financial transactions these days are related to IT and can be done in various forms.

But Ambrin’s work will be closely followed and he will constantly be in the news for the next few months. It’s no longer a once-a-year big splash for the Auditor-General.