A number of central banks have been making moves to shake up their currencies over the past few months.

Faced with slowing global growth and lower inflation – disinflation or deflation in a number of countries – central banks started taking action primarily by cutting interest rates or injecting liquidity into the system.

From Japan increasing its monetary stimulus to Singapore putting the brakes on its currency’s appreciation against a trade-weighted basket of currencies, stemming currency appreciation has led to talk that a currency war could be brewing.

Using the value of currencies to boost trade-heavy economies has been the flavour, as global economic growth slows.

The International Monetary Fund cut its global growth outlook from 3.8% to 3.5% this year and with growth easing in China, Europe and a number of emerging economies, giving support to such economies has been the focus of governments.

The European Central Bank instituted its own quantitative easing (QE) policy on Jan 22 to get growth going in the European Union. 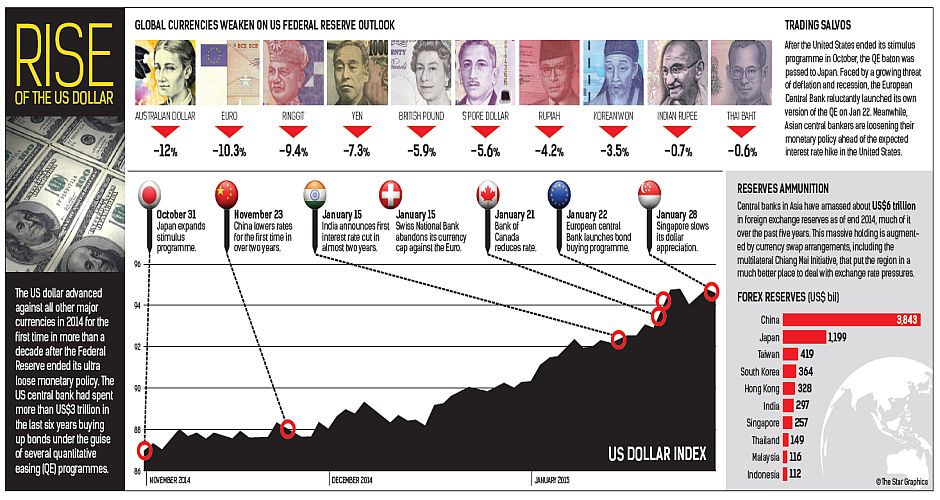 The effectiveness of that policy has been questioned, but the immediate result was that the euro, which has been weakening against the US dollar, continued to fall against the greenback.

With Japan flooding the market with liquidity to get growth and inflation going with its own QE, the result has been a marked weakness in the currency.

The yen’s steep depreciation against the dollar, according to reports, is causing uneasiness in South Korea, which competes almost head-to-head with Japan in the export markets.

What is allowing countries that have taken action to cut their interest rates has been the slowing inflation.

The steep fall in crude oil prices since June last year to below US$50 a barrel has eased inflationary pressure worldwide, as energy is usually the biggest component of inflation. It’s been reported that over the past six months, 18 out of 50 MSCI countries have cut rates.

That was followed by Singapore’s move to slow its rise against a basket of currencies, which saw the Singapore dollar continue its recent drop against the US dollar.

Falling inflation was the primary reason for the Monetary Authority of Singapore (MAS) to make its pre-emptive move to slow down the appreciation of its currency by reducing the pace of increase. But quite a number do not pin that move as a significant competitiveness boost.

“The adjustment does not translate into a massive competitiveness impact,” says Saktiandi Supaat, Malayan Banking Bhd’s head of foreign exchange (forex) research based in Singapore.

MAS’ next policy statement will be due in April where it could give some clarity on the competitiveness angle, but the drop in the Singapore dollar against the greenback does help to boost inflation, which is expected to be lower than had been earlier estimated. The previous outlook was for a -0.5% to 0.5% rise in inflation.

A slower rate of appreciation would also help Singapore’s economy, which is already dealing with cost pressures from a tight labour market where the unemployment rate was a meagre 1.6%.

Furthermore, with non-oil domestic exports reportedly dropping for the past two years, a weaker Singapore dollar will help, especially when exports to China and the United States have fallen on a year-on-year basis.

Pressure is also emerging in Thailand, where the stronger baht is also not helping with exports, which dropped 0.4% last year.

Finance Minister Sommai Phasee was recently reported to have said that the Thai central bank should “in theory” lower borrowing costs, and that exports are under pressure from a stronger baht.

The Philippine peso and the baht are two currencies in this region that have in recent months seen an appreciation against the dollar. The reason for this is that the fundamentals of these economies have improved.

“The Philippines is not reliant on commodities as much as Malaysia, Indonesia and Thailand and that is the biggest driver of its currency,” says a currency strategist in Singapore.

“It just registered its strongest gross domestic product (GDP) growth over three years since the 1950s.”

Thailand, recovering from floods and political unrest, has also been a flavour for foreign investors since stability returned.

Its stock market in US dollar terms is now bigger than Bursa Malaysia and one of the reasons for the currency’s rise is the drop in oil prices.

The fall in crude oil prices is expected to have the biggest economic benefit to Thailand and the Philippines among countries in this region, according to Bank of America Merrill Lynch.

“Lower oil prices have not resulted in any sizeable GDP growth upgrade as yet for emerging Asia, in part because of slowing global growth outside the United States.

“Lower oil prices have also resulted in a sharp drop in inflation, particularly in Thailand, the Philippines and India, which has allowed central banks to stay accommodative. Emerging Asian countries will likely see a boost to GDP growth in the range of +10bp to +45bp with every 10% fall in oil prices, if the oil price drop was purely a supply shock,” it says in a note.

The low-inflation environment will also allow central banks in this region to become more accommodative.

How low will the ringgit go?

The past three months have been a volatile period for global currencies and no more so when it comes to the ringgit, which is the second-worst performing currency in Asia against the US dollar over the past 12 months after the yen.

Directly, the drop in crude oil prices has affected the fundamentals of Malaysia and carved a chunk out of government revenue, as receipts from crude oil production account for slightly less than 30% of income.

With revenues depleted, the Government has revised its budget for this year to take into account crude oil averaging US$55 a barrel in 2015 from an earlier projection that it would average US$105 a barrel when the budget was announced last October.

The revised budget also led to a slight increase in the fiscal deficit to 3.2% of GDP from an earlier projection of 3%.

Apart from fiscal discipline, the ringgit’s fortunes have been loosely linked to the price of crude oil.

Prior to that decision, the price of crude oil had started to rise, delivering valuable additional revenue to the Government.

Anecdotally, the ringgit gained strength against the dollar when oil prices soared and approached the RM3 to the dollar mark when crude oil hit more than US$140 in 2008.

Forex strategists say sentiment does affect the movement of a currency, but it moves in parallel with the fundamentals of an economy. With Malaysia’s fortunes closely linked to the price of crude oil, it is inevitable that the thinking of the country’s fundamentals will also change.

“If energy prices continue to drop, then it will hurt the ringgit,” says a forex strategist based in Singapore.

“Once the global events settle down and stabilise, the ringgit will trend towards our underlying fundamentals,” Zeti told reporters at an event.

Apart from lower crude oil prices, the ringgit has also been hurt by capital outflows.

Malaysia’s forex reserves in the first two weeks of January were at its lowest level since March 2011 and foreign investors held 44% of Malaysian Government Securities (MGS) as of the end of last year.

Analysts say while foreigners have sold off a chunk of government debt, the remaining are not expected to do so as long as they are making a decent return on their holdings. The rise in the value of the 10-year MGS will give support to their holdings.

A number of forex analysts think the ringgit will not slip below RM3.70 to the US dollar, but some do admit they did not think it would be trading at the current level of around RM3.63 a few months ago.

“If it does go to RM3.80, then people will get panicky,” says one forex analyst.

Semiconductor and rubber glove makers to gain from weak ringgit