Creador and its founder stir excitement in the market

Just this week, amidst a gloomy market, one stock went against the tide. And it was a company that had Creador and Brahmal written all over it.

Masterskill Education Group Bhd (MEGB), an ailing company that had disappointed its early investors, shot up by 15.5 sen or 26% to 74 sen on Thursday, a notable performance considering the stock had been stuck in the 40-sen range for most of the year.

MEGB’s bad fortunes – its earnings have been hit by a plethora of issues since its listing in 2010 at an offer price of RM3.60 per share – have turned out to be an opportunity for Creador.

Ten days ago, Creador along with a small education group, SMRT HOLDINGS BHD

, expressed the intention to buy into MEGB to turn around the latter. That seems to have been sufficient to garner interest in the stock, considering that the plan is to use SMRT’s education know-how and Creador’s strategic capabilities and financial muscle to create an education group of some size.

But go back six months ago, neither MEGB nor SMRT were on the investors’ radar.

Things changed in early May, when Brahmal (the private investor) emerged as a substantial shareholder in SMRT, driven by the latter’s education business.

The move wasn’t surprising: education is big business and and a sector well-liked by private equity funds.

Creador has alredy bought 19% in MEGB and plans to buy 10% more from major shareholder Siva Kumar M. Jeyapalan, at an average cost of 60% per share. Hence its entry into MEGB will be at a cost of a mere RM65mil. (SMRT will buy another 20% from Siva.)

Creador was also in the news this week for its investment in CTOS Data Systems Sdn Bhd, Malaysia’s largest private credit reporting agency, for which it paid RM215mil for a 70% stake.

Brahmal the investor and Creador the fund

What make Creador and Brahmal noteworthy are the handsome returns they are able to achieve, no doubt stemming from a keen eye on picking the right companies to put their money in.

But first, the issue of the two separate entities. While Brahmal is CEO and founder of Creador, the fund is professionally managed, with its own investment committee, senior advisers and managing directors. The perennial question observers raise is this: is there a conflict issue that arises when Brahmal makes his personal forays into the market?

To be sure, the question has been addressed by Brahmal before but for the record he states the view again: “The priority whenever a new investment comes up is for the fund. However, Creador has certain limitations… So when an opportunity does not meet the criteria, anyone in the firm can make those investments,” he says.

Creador, with a minimum investment size of RM30mil, has to have board representation and go through a thorough due diligence process.

, MyEG Services Bhd (at least when it traded at 70 sen a share, the time when Brahmal bought it) and IFCA MSC Bhd

, while Creador has taken larger stakes in companies such as Oldtown Bhd

Whatever the case, both fund and personal investor are constantly the talk of town because of one simple fact: their investments in public equities have resulted in significant share price appreciations. 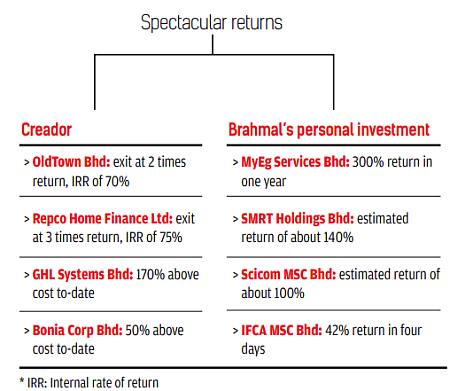 It is Creador the fund which is the bigger story though, considering the larger amount of capital at stake, the impact it is having on the domestic private equity market and the value proposition it offers both to its investors and the companies that it invests in.

They are not an easy feat. Sceptics though are inclined to believe that Creador has gotten all or the bulk of its money from billionaire T Ananda Krishnan.

Brahmal doesn’t cringe when faced with this question, although he must have heard it suggested before.

The single largest investor in Creador’s funds is a Boston-based university, he says. In fact 75% of investors were outside of Malaysia, made up of a mix of family funds, pension funds and even fund of funds (firms that raise funds to invest in private equity firms).

It now aims to launch its third fund, with an ambitious target of raising US$500mil (RM1.7bil).

Creador’s perceived link to Ananda stems from Brahmal’s previous work experience, where he had spent a few years working at ASTRO

during the pay TV giant’s early years. Brahmal is also a board member of Ananda’s privately owned vehicle, Usaha Tegas. And it is very likely that Ananda is one of the investors in Creador, but clearly no where near the largest.

Brahmal cut his investment teeth after leaving Ananda’s group in 1999 to head to India, where he teamed up with a classmate from Harvard to co-manage a private equity fund called ChrysCapital. In India, the team achieved huge success, hitting annual returns of 43% for 11 years, capitalising on India opening up its economy and the flourishing of outsourcing services-driven companies tailored largely to the US market.

With such accolades to his name, Brahmal decided to venture back home to set up Creador and raise his first fund.

Creador is already sitting on some pretty significant returns of 30% per annum. “It is natural in any fund to have some investments to do better than others. Our first two exists returned (a multiple of) 2.2 times/72% IRR (internal rate of return) but some investments may have returns that are “normal”. I don’t expect any of our investments to lose money as we are backing companies with a strong track record, deep and sustainable ‘moat’ and fantastic management teams. In a worse case we look to protect capital - so we usually model returns that at the very minimum get us our capital back”, explains Brahmal.

Two themes run through Creador’s DNA, that possibly account for its success: it invests in companies that seek to expand regionally (and is able to help such companies toward that goal) and it is not afraid of taking minority stakes in companies.

Says Brahmal: “We have been fairly involved with several of our Malaysian companies including Old Town and Bonia, particularly in Indonesia. We usually have detailed discussions on their strategies and execution plans and then our teams work with them to turn those plans into reality.”

But the most impressive strategy is taking on non-control positions in companies. Many private equity firms seek to wrest control of companies they buy into, and this is the model used by the two other big players in the Malaysian market, Navis Capital and Ekuinas.

Brahmal says Creador’s mission is to “partner with passionate entrepreneurs to build world-class companies. We don’t think you need to control a company to create good returns. On the contrary, we feel that the best investments are made in finding leaders in their respective segments and working alongside these entrepreneurs to build their companies to the next level.”

Creador invests in sectors that offer high growth and in companies that lead in those segments. Companies are assessed on management strength and track record as well as sustainability of earnings, among others.

Creador examines between 300 and 400 companies a year and has a strong focus on Malaysia, Indonesia, Singapore and Indonesia.

Over the last three years, Creador had met over 1,000 companies from these markets. While it invested in seven companies so far this year, Brahmal reckons that Creador’s typical appetite is to invest is four to five companies a year.

That should keep Creador fairly active and popular in the local market. But what about Brahmal the private investor? Will his personal forays decline in number as Creador grows in size? “The main focus is always the fund because the senior team has significant capital in the fund. Consequently, we would mainly expect to see the fund doing the larger number of investments. We might have to explore a separate platform or fund for these smaller public investments which will allow our staff and other friends to participate in,” says Brahmal.

Journey of a savvy investor

‘There are many exciting minority deals in the market’