Sunway shares down on stake sale by GIC

shares worth RM482mil that were owned by GIC Pte Ltd have been traded in an off-market deal.

According to stock market data, a total of 150.6 million Sunway shares changed hands yesterday at RM3.20 each.

Reuters reported that GIC, Singapore’s sovereign wealth fund, which owns a 8.7% block in Sunway, had hired CIMB and JP Morgan as the joint bookrunners for the sale of Sunway shares.

Reuters, quoting the term sheet, said that the shares were being priced at between RM3.20 and RM3.30 apiece.

It isn’t clear why GIC is selling its shares, nor is it clear who is the buyer or buyers of the block. In a filing with Bursa Malaysia yesterday, it was announced that Sunway’s wholly-owned subsidiary Sunway Holdings Sdn Bhd had entered into a share sale agreement with Sunway Concrete Products (S) Pte Ltd to buy a 30% stake in Hoi Hup Sunway Development Pte Ltd for RM774,193 cash.

“The proposed transfer of Hoi Hup Sunway is undertaken to streamline the businesses of Sunway Construction by transferring its non-construction businesses to be held directly by Sunway Holdings,” Sunway said.

Sunway plans to re-list its construction unit Sunway Construction in the second quarter of next year to unlock the value of the company and distribute part of the benefits to the shareholders of Sunway. 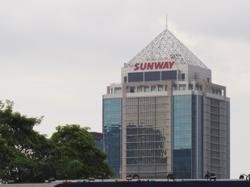