PETALING JAYA: Malaysia will be producing its prototype lithium ion batteries for electric buses, cars and energy storage by the first quarter of next year.

The project, which is a collaboration between the Malaysia Automotive Institute (MAI), transport logistics firm ARCA Corp Sdn Bhd and Australia’s AutoCRC Ltd and Swinburne University of Technology, is aimed at developing the most energy-dense battery for the market, says MAI chief executive officer Madani Sahari.

“There are only a handful of lithium ion battery manufacturers on a global level. We’re currently conducting research on producing a prototype for the local market and possibly export.

“However, we want to focus on producing batteries with high energy density,” he told StarBiz.

Madani said the prototype battery would first be used on an electric bus prototype that is being be developed by ARCA Corp.

“The bus is expected to start running in the second quarter of 2015.”

According to reports, the buses will first begin operations in Putrajaya and Langkawi. ARCA’s total investment is said to exceed RM200mil over a period of four years, part of which may be provided by the Government should the company qualify for financial assistance.

The next step, said Madani, was to “upscale” the production of the lithium ion batteries.

“Once we have successfully tested the prototype battery, we want to then produce them locally on a wider scale.

“This would be more cost-effective than having to source for them from other countries.

Madani also confirmed earlier reports that plans were in the pipeline to set up a plant to produce the lithium ion batteries.

“We have not finalised whether to set up a brand new plant or expand an existing plant,” he said.

The plant is part of the National Automotive Policy (which was announced in January) to reduce vehicle prices by 2018 and help turn Malaysia into a regional energy-efficient vehicle hub. 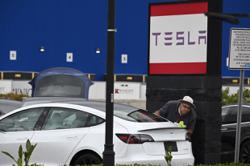 Tesla cuts battery cost on road to US$25,000 model