File picture shows a Petronas oil rig. A key aspect of the GBH deal is the entry of O&G services company Dynac Sdn Bhd into the group.

TAN SRI Robert Tan Hua Choon, once dubbed the “the Casio King” for being the only distributor of the brand’s watches and calculators, just keeps unlocking the value of his companies.

PMB didn’t buy new shares in PDZ, but rather acquired the block from existing shareholders.

On record, Tan owned 19% of that 27% block that was sold to PMB but industry observers don’t rule out that parties aligned to Tan held the remaining portion of that block.

PMB said then that it was buying PDZ to make it its listed vehicle to focus on the oil and gas (O&G) sector.

Interestingly, at the point of Tan’s stake sale to PMB, PDZ did not have any notable O&G assets to speak of and was carrying a net loss although it did have a relatively clean balance sheet comprising cash balance of RM24mil, with borrowings of about RM6mil to RM7mil and RM200mil of sales.

Just a few months earlier, another of one of Tan’s firms, Malaysia Aica Bhd had been taken over by Datuk Ter Leong Yap of property development firm Sunsuria Bhd

who paid some RM33mil for Tan together with several other major shareholders’ stakes. 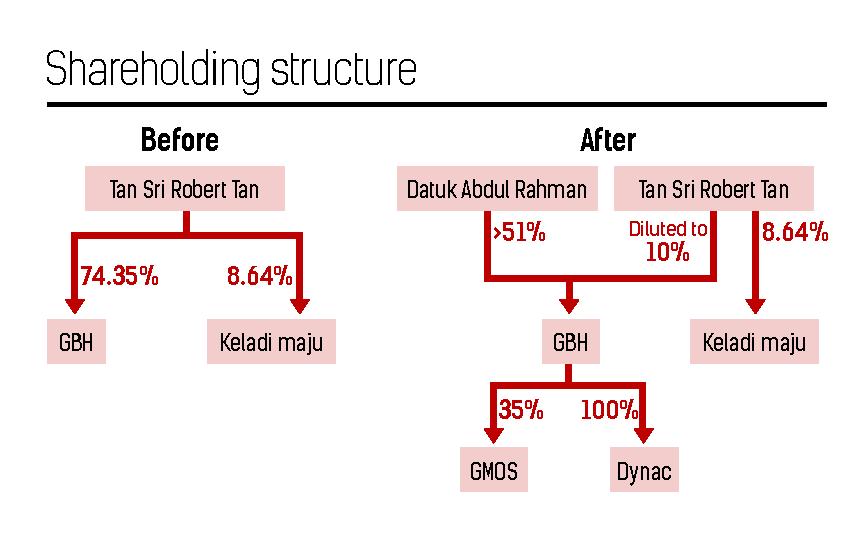 Now, the 72-year-old is continuing the value creation process and stands to gain some RM134mil following a rejig of two other listed companies that he controls – sanitary ware manufacturer Goh Ban Huat Bhd (GBH) and property developer Keladi Maju Bhd.

Earlier this week, both companies made a string of announcements regarding this.

Tan will receive RM134mil by selling some 66.8 million GBH shares, or a 36% stake, into a mandatory general offer (MGO) that will be made by GBH’s new shareholder, who in turn will assume control of the company via a reverse takeover (RTO).

Here’s how the math works: GBH sells land to Keladi Maju for RM192.4mil cash. That cash is then used by GBH to buy an O&G services company. That company, in turn, makes a general offer for GBH shares, and Tan sells his GBH shares into the MGO.

While Tan’s benefits from his latest deal are quite clearly spelt out, the question then is whether value is also being created for minority shareholders of both GBH and Keladi Maju.

To be fair, the rationale for the exercise is to turn GBH into an O&G services firm while the land, which is being sold by GBH into Keladi Maju, does have development potential, being located along Jalan Segambut which is about three kilometres from Mont Kiara in Kuala Lumpur. While Tan's benefits from his latest deal are quite clearly spelt out, the question is whether value is also being created for minority shareholders of both GBH and Keladi Maju.


Shareholders are required to vote on the deals while Tan and other directors with deemed interest are to abstain from voting.

According to both companies’ most recent annual reports, the major shareholder in GBH is Tan with a 74.35% stake while the three single-largest shareholders in Keladi Maju are Tan with a 8.64% stake, Tan Han Chuan with a 8.16% stake and Neoh Poh Lan who has a 4.75% stake.

Neoh is also the second-largest shareholder after Tan in GBH with a 4.01% stake.

Notably, a key aspect of the deal is the entry of the O&G services company, Dynac Sdn Bhd, into GBH.

GBH is buying 100% of Dynac for RM632mil. Of that, the vendors of Dynac will receive RM210mil in cash and the remainder via new GBH shares, which, in turn, will result in an RTO of GBH. The price tag of RM632mil values Dynac at 15.6 times multiple of its profit after tax of RM40.4mil for the year ended June 30, 2013.

“At face value, this is not a cheap acquisition. Industry standards are somewhere around 11 times,” comments a local O&G analyst.

Dynac provides cooling systems and various services such as cable support and engineering services for O&G and other industries. Its main products include heat ventilation and air-conditioning systems, known in industry jargon as HVAC systems.

Dynac’s owner is Datuk Abdul Rahman Mohamed Shariff, who will emerge as the single-largest shareholder of GBH. Abdul Rahman will undertake an MGO to acquire the remaining shares he does not own in GBH at RM2 each.

This is where Tan has given an undertaking to sell 36% of his entire stake held in GBH into the MGO which, based on the RM2 price tag, is valued at RM134mil.

GBH on Wednesday also said it was proposing to buy 35% of Globalmariner Offshore Services Sdn Bhd (GMOS) for RM38mil cash.

It isn’t clear how many of such vessels GMOS currently has, but it was reported that GMOS had bought a 20% stake in TH Heavy Engineering Bhd

’s only FPSO facility for RM43mil in February.

The ones selling the GMOS shares are Dynac, Abdul Rahman and other individuals.

Amid the complexity of the deals, the market appears to have given its stamp of approval.

Shares of both GBH and Keladi jumped 10 % and 8% to RM2.20 and 35 sen respectively after they were re-quoted on Thursday following a suspension to make way for the deal announcements.

At yesterday’s finish, GBH was RM2.25 while Keladi Maju ended at 34 sen.

He had originally offered a lower price of RM1.25 but that offer, which had faced much opposition from GBH’s founders, had lapsed.