BACK to basics is the mantra of Ahmad Jauhari Yahya these days. He reckons that this approach can save Malaysia Airlines (MAS). No doubt, not everyone is convinced that Ahmad Jauhari, the ailing airline’s fifth head honcho in the last 10 years, can pull off that feat.

It seems that saving MAS is increasingly an impossible task.

MAS, has over the past decade, been through several turnarounds and restructuring and at every stage something new is being done. But what is still lacking is sustainability in profits. Operating in an ever-increasing competitive landscape, MAS struggles with legacy issues.

The ardent critics have often suggested that a company like MAS should be shut down. Clearly, that’s not an option for Ahmad Jauhari, who was appointed back in 2011 to fix things at the airline.

On the contrary, going by his assessment, the airline is in recovery mode.

“Everyone has his own recovery model and MAS decided to have a more gradual and sustainable recovery model by harnessing the assets and the people that we have,” he told StarBizWeek. 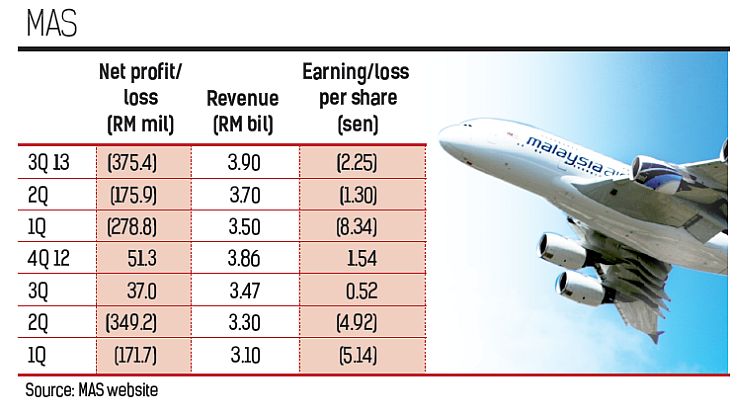 Being an engineer by profession, he is virtually taking out the nuts and bolts and giving them a wash in the hope that MAS will be able to start afresh and rid itself of its legacy issues.

Two years into this task, there are visible results.

He has made inroads in plugging leaks in procurement. He has renegotiated key contracts to get MAS better terms, something that his predecessors had struggled to do. Ahmad Jauhari is also said to have enhanced governance and accountability among MAS staff and sought to end many legacy legal suits the airline was involved in.

He has also changed the way tickets are priced and sold, improved all touch points and outlined the path for future growth.

Detractors, though, reckon that the pricing of tickets is out of whack – they believe MAS is throwing fares to fill seats at the expense of yields. He reckons this pricing strategy is the only way to win back market share.

What is troubling though is that despite all that’s being done, earnings wise, MAS continues to bleed.

Hence clearly more needs to be done. And will MAS ever get back to the black anytime soon?

“There has to be a level of realisation (from within) and not mere talking that we just have to do more, produce more, and get our cost down. We have to sell at the right price and go back to basics. I don’t want any international consultant to tell me what to do.

“It is all about doing the basic right. And the basic is all about making sure we have an effective network, efficient fleet, productive work force, and a efficient cost structure to support our operations,” Ahmad Jauhari says.

In his quest to turn the airline around, his strategy of filling up seats by discounting fares and at the expense of yields did not bode well. Experts believe it does not pay to dump fares, but Ahmad Jauhari says there is not much of a choice if MAS wants to regain market share and be in the competition.

The strategy has seen its load factor – a measure indicating the number of seats filled up – soaring and for the second quarter of 2013, MAS achieved its best ever load numbers, even beating rival Singapore Airlines (SIA).

Equity analysts watching MAS are still not impressed and there is scepticism that MAS may not be able to push up its yields given the competitive environment.

The entry of Malindo Air has put added pressure on MAS to drop fares.

Aside from Jakarta and Bali, two key routes Malindo now flies to from Malaysia are Dhaka and New Dehli. These are also significant routes for MAS. MAS had to react to this competition by almost halving its fares, clearly narrowing yields.

MAS was the worse hit, but even AirAsia

was largely unaffected because all of its routes are international. “Overall, we estimate the yield decline for 2013 at 8%” says Mohshin.

If MAS does not dump fares it will be out of the race, Ahmad Jauhari says.

“What do we do? Are we so high and mighty? Then no one will fly with us. But how long can the airlines sustain this, it is a losing battle. We will still have some cost pressure, that’s all I can say,’’ he adds.

Thai International Airways (TIA) yields were lower at 11.03 US cents.

But airfares are expected to rise this year, especially in the United States, the Middle East and Asia and if that happens it will help lift MAS yields, provided it does not out price its fares.

The early warning signs from analysts is to “expect several more quarters of losses.”

For the first nine months of 2013, the airline flew in a RM827mil net loss and for the fourth quarter analysts believe the airline will chalk up close to RM200mil in net losses. That is why they are betting on a RM1bil to RM1.1bil net loss for full year 2013.

RHB Research has no forecast figures for 2013 but says in a report that it is concerned the high loads achieved were at the expense of yields.

If airfares go up Ahmad Jauhari should be sitting pretty as this would nudge up yields and prove his sceptics wrong.

“The higher airfares may be the sweetener but the airline has to work furiously on bringing down its unit cost and push for higher productivity levels and that is not going to be an easy task,” says an expert.

Another positive is that global cargo is on the rise and the Asia Pacific carriers are the largest players in the global cargo markets with nearly 40% market share. MAS should benefit from rising demand for cargo services. And this being Visit Malaysia Year, the airline will hopefully carry more traffic.

The International Air Traffic Association (IATA) also predicted that Asia will continue to boom in passenger air travel. A 5% growth rate is predicted and Ahmad Jauhari says the airline should grow at least by 5% this year. He also wants to push for ancillary income to help raise income but did not elaborate.

Ahmad Jauhari says MAS will continue to focus on growing its market share in Asia this year by increasing destinations and frequencies but did not elaborate.

But MAS also needs to build on its network, replace and replenish its fleet, improve product appeal and enhance its service offering. He adds that “in order to build capacity and take advantage of the growth in this region, we have to plan ahead to remain relevant.

He says in the past the airline has only replaced its aging fleet but not in capacity building. But he is working on buying new planes for the future and the airlines is said to be look at the A350, and the latest version of the B777 aircraft. A decision will be made by first quarter this year.

The airline has also undertaken a financial restructuring and has about RM5bil to take it through until it starts turning profitable. But buying planes means it would be spending a lot more money in the future and hence it is critical for Ahmad Jauhari to ensure sustainability in earnings.

Whilst Mohshin is looking at RM165mil in net profit for 2015, RHB Research expects MAS to return to profitability earlier in 2014 with a RM7mil net profit.

Ahmad Jauhari says “the time line we said earlier is to at least break even in 2014.”

A key task this year is to reduce cost and one way is by reducing MAS’ seemingly too large workforce.

His biggest challenge since he came onboard is to cajole everyone at MAS to work together to achieve better results. He has had a lot of resistance in the past but has been engaging more with the unions and the employees to push for higher productivity levels.

“We do find that we have not pushed productivity to the levels that are needed to be competitive in the current airline space. So in 2013 we added 20% more capacity or available seat kilometres (ASK, which is the measure of an airline’s passenger carrying capacity), and we carried 30% more passengers year on year whilst using the same number of aircraft and people, and staff productivity is up by 20%,” he says.

“So the weakness was to get more output and deal with the cost structure, and also when we say we need to get the basics rights, we are saying the product must be good, productivity levels should be at the same level with the industry and hopefully we can price ourselves more competitively,” he says.

He added that “it all boils to attitude and mind shift change. The good part is that there is an awareness... but we are aiming for a gradual recovery and sustainabilty, and it will take some time.”

Still, how can he bring down cost further?

“Why not start with a golden handshake for about 500 employees first, (make it a win-win for both employee and employer), that will provide significant cost benefits to the airline,” says Mohshin.

He is also working with oneworld partners for partnerships and there has been more than 60% rise in passenger traffic from its oneworld connections.

Another challenge is perception. Many still think MAS is in dire straits and that is reflected with the losses the airline is reporting.

“You must realise that I am working on the same assets, sweating the assets, and I don’t think there is anything more that we can do until we get new aircraft.

“The only thing that has changed in physical perception was the A380, and that is because we had the hardware to do it. The thing is when you start pushing things like productivity levels, fares, do the customer see it? No, they don’t. But if you give them nice nasi lemak with 10 prawns onboard, then they see it, but you know how much that costs?” he says.

Whatever he does is not enough because the losses have not been erased but once they are, all will be forgotten, until then he has to live with the perception despite the massive overhaul that is taking shape at MAS.

Getting it right basically