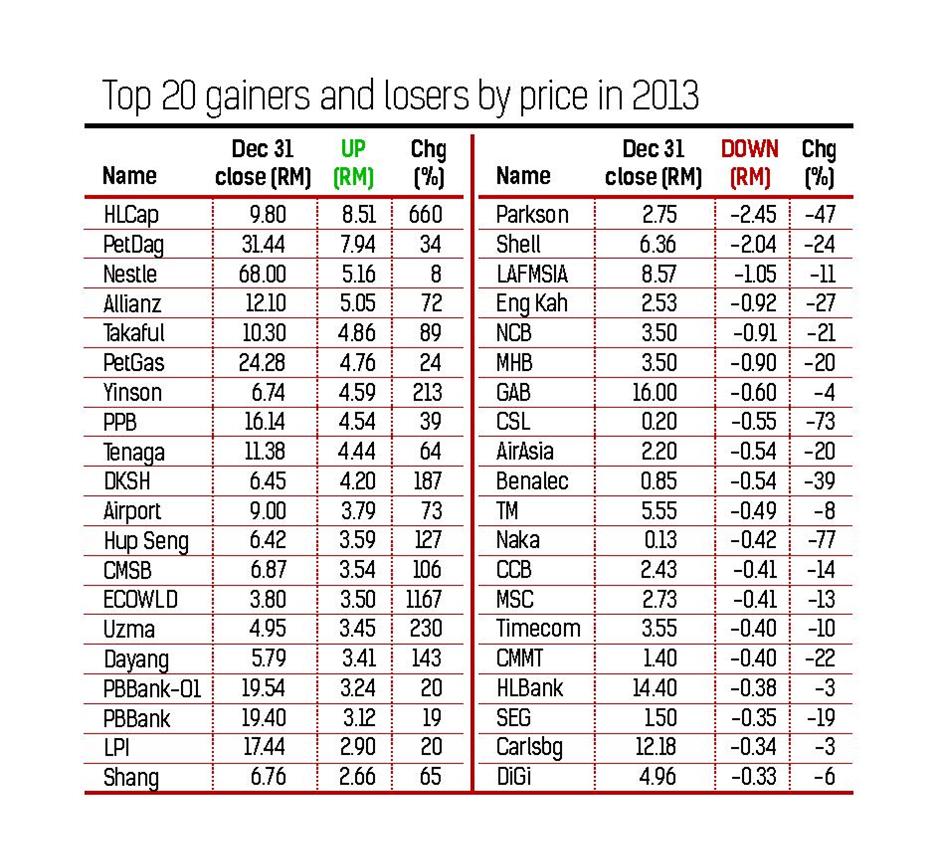 “Our market has outperformed other markets due to the resilience of our economy, which is well-supported by the country’s diversified income such as oil and gas (O&G) as well as palm oil,” he said.

He explained that the relatively low holdings by foreigners had mitigated the higher level of outflow seen in other regional peers, while Malaysia continues to be seen as a lower risk market for them.

Compared with the FBM KLCI, Singapore’s Straits Times Index rose marginally at 0.01%, while the Jakarta Composite Index slipped 0.98% and the Bangkok Stock Exchange fell 6.7%. “Foreigners had been net buyers in the first half before the 13th General Election, but due to talks of the quantitative easing tapering in the United States, money flowed out of the country in the second half,” he said, adding that local funds, however, had alleviated the selling pressure and subsequently lifted the FBM KLCI to fresh highs.

Kenanga Research head Chan Ken Yew concurred. “We think that there is still a decent upside for the FBM KLCI in the first half of 2014, possibly looking at the 1,900-point level,” he told StarBiz.

surged RM8.51 to RM9.80 from RM1.29 a year ago on prospects of privatisation by its owner Tan Sri Quek Leng Chan and a very thin free float.

, which did a reverse takeover of Focal Aims Holdings Bhd, ballooned almost thirteen times to RM3.80 from 30 sen at end-2012.

As for the index-linked stocks, Petroliam Nasional Bhd-related counters were in focus, while Tenaga Nasional Bhd

jumped 64% mainly boosted by the announcement of the electricity tariff hike.

Going forward, Chan said some of the uncertainties that could cap market performance included the monetary policies in the United States and the inflation rate locally, as well as the anticipation of the impact of the implementation of the goods and services tax locally.

“We are selective on stocks and are bullish on the O&G sector,” he said, adding that plantation stocks as well as telecommunications stocks, which had been lagging, offered some opportunities.

Nonetheless, he expects the ringgit to strengthen to 3.15 against the US dollar in 2014 supported by fundamentals.

He said the negative sentiment towards the regional currencies, notably the Indonesian rupiah and the Thai baht, had spilled over to the ringgit.

“Our ringgit is fundamentally stronger than these two currencies,” he said, citing the decline in demand for the rupiah and political concerns that had impacted the baht.

“We feel that the ringgit may not have a strong upside over the next one year, at least not until a clearer picture of the US Federal Reserve’s policy action emerges,” it said in a report.